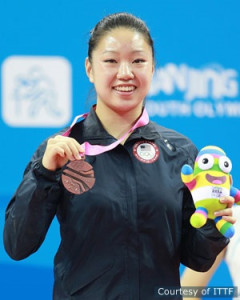 “It feels amazing,” Zhang said of her medal-winning performance. “It feels like a dream, honestly. I just can’t put words to describe it because it feels like I’m floating.”

Her dream come true didn’t come easy. Her medal hopes wavered throughout the match. First her opponent, Miyu Kato of Japan, was up a game (12-10), then Zhang bounced back to win the second game, 11-9. The two continued to tie each other up and prevent their opponent from taking game point. Zhang continued her winning ways, closing out the third game 11-9. In the fourth game, Zhang’s strategy began to fall apart.

“In the fourth game after she (Kato) took a time out I won two more points, and then at 9-5 I started thinking too far ahead,” Zhang said. “I was thinking if I could win this game I could lead 3-1 and that’s a really big advantage for me, so I started rushing too much and not really thinking about my strategy.

Zhang remembered to remain calm, cool and collected and came back to win the fifth game, 11-9, as well as the sixth, 11-8, to end the match at 4-2 and secure the bronze, as well as a place in U.S. table tennis history.

“Honestly I think the major reason that I won was the fact that I was able to keep myself strong and my mentality was 0-0,” she explained. “I try not to think about if I was down or if I was up. If I was up and thought about that too much I started rushing and forgot about the strategy so I kept repeating 0-0 to myself. I think I even mouthed it a few times.”

The 18-year-old knew how to channel the proper mentality thanks to a few years of international experience under her belt, including the London Games in 2012. Despite having already competed on the Olympic stage, there was no doubt in Zhang’s mind she would want to compete at the Youth Games as well.

“It’s just an amazing honor to be here,” Zhang said. “Both events are huge and it’s just really humbling to wear the U.S. flag and go out there and represent my country. Obviously I would love to be here.”

Zhang said she is loving every part of the Nanjing Games, from the volunteers to the athlete village, as well as the fact that it’s in China, the birthplace of both her parents, who were in the crowd Wednesday to watch her win bronze. Zhang is one of three athletes on the U.S. Youth Olympic Team who speak Chinese and says she has been putting it to good use in Nanjing. Zhang’s Games experience will continue with the mixed international team competition, after which Zhang will begin her freshman year at University of California, Berkeley, which she says is ranked among the top two college table tennis programs in the nation.

“I’m really excited to go to Berkeley,” she said. “It’s an incredible school. I love the environment there.”

After flying home with her historic medal and becoming a college athlete, the next item on this Olympic enthusiast’s radar is working towards more Olympic hardware at the Rio 2016 Olympic Games.

“I wanted this medal so much, not just for me, but for my country. I had to keep myself calm before the match and try not to think about it too much. I was even more determined to win the medal, as my roommate came home last night with a silver. I feel like I am floating I am that ecstatic.”

“During the match, it was vital for me to keep calm and not to rush. If I rushed then I would lose, sometimes it was necessary just to play a little slower. In the fourth game, when led 9-5 and then lost, I started thinking ahead, I kept thinking that if I could win the game I’d be three-one ahead, a big advantage.”

“During my time out, my coach told me to take a breather and not to be anxious. Mentally I felt good today, I tried hard not to think of being up or being down.”

“After Lily lost the fourth game, I told her not to worry, don’t play too safe, work harder and fight! Both players focused on their backhands and they were a little afraid to use their forehands. I tried to encourage Lily to move to direction of the play and to be prepared to play long rallies because Miyu played very safely. So it was important that Lily was aggressive.”

“The feeling is just amazing! A medal, the first ever Olympic medal for the United States!”