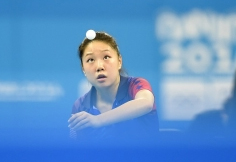 Lily Zhang during her quarterfinal match. Photo by Huang Xiaobang/Xinhua

All four semifinalists have been ranked among the top 100 in the world, of all ages, by the International Table Tennis Federation. In the August ITTF rankings, Duo is the highest ranked among the final four at No. 27, with 2,538 ranking points. Kato is next at No. 60, with 2,362 points. Liu and Zhang are not in the current rankings, though Zhang was at No. 67 and Liu at No. 35 earlier in the year.

Zhang, the highest ranked American, was at No. 84 in the July rankings with 2,263 points.

Lily played well on the road to the Semi-Finals. In her first match she defeated Seri Park of Korea, then she beat Lisa Lung of Belgium, then in the quarter-finals she defeated Tamolwan Khethuan of Thailand.

In the first round of the Women’s Singles to reach the main draw, Lily defeated Seri Park of Korea. Lily reported to USA Table Tennis, “I had watched her play in Korea and I knew that she was good with her service and first attack, especially from the forehand. For me, it was important that I returned the service well, either a short return or a flip. I was thinking ahead, and eventually lost my focus. In the fourth game, she changed her services a little, having more topspin services. So it was vital that I flicked the returns. I was mentally well prepared for this match.”

In the main draw Lily Zhang defeated Lisa Lung of Belgium 4-2. (5-11, 7-11, 11-6, 7-11, 12-10, 5-11). This match advanced her to the quarter-finals. Lily Zhang commented to USA Table Tennis on the match, “Her backhand is very strong, and it was not an easy match! I won the first two games but then in the third, I started to rush. After the third game, I played more to the middle but I think one of the main reasons I won was because I kept calm.” Coach Lily Yip stated, “Lily was under pressure, she was the higher seeded player, and was expected to win. She was very strong mentally and she played with good control!” 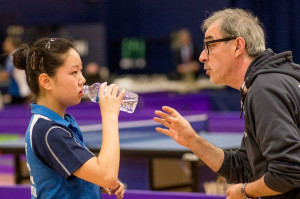 Lily and her coach, Massimo Costantini at the ICC Table Tennis Center.

In the Quarter-finals match with Tamolwan Khethuan of Thailand, Lily was the victor at 4-1 games. (8-11,10-12,10-12,11-9,3-11). USA Coach Lily Yip said, “Lily kept calm, she controlled the play but she did make the odd mistake; it was important she did not rush. Tamolwan plays quite slowly.” Coach Yip also said, “The games were very close; we knew that Tamolwan was strong from the backhand, so Lily focused her attacking strokes towards the middle and forehand. Also, Lily was prepared for the forehand service Tamolwan uses but she didn’t use it much; on the few occasions she did use the service, Lily attacked quickly.”

For many years, Lily has trained at the ICC Table Tennis Center in Milpitas, CA. Both players, one female and one male, who represented USA at the Youth Olympic Games have trained full time with ICC Coach Massimo Costantini of ICC for the past four years. Krishnateja Avvari played in the male competition. The ICC Elite Program is sponsored by STIGA.

ICC VIDEO: Lily Zhang and the Journey to Olympic Medals

How Do You Know If You Have Good Table Tennis Strokes? by Samson Dubina