Table Tennis Tip: Why You MUST Attack the Deep Serve

Table Tennis Tip: Why You MUST Attack the Deep Serve 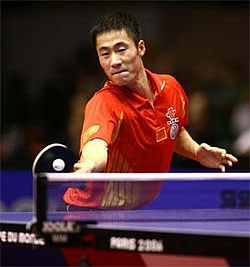 Against a short serve, you can take the ball quick and rush the opponent, you can go for angles, and you can drop the ball short. So have a number of ways to mess up an opponent without actually attacking the serve. This is where you can get really creative.

Against a deep serve, you don’t have these options. You can’t rush the opponent with a quick shot, go for extreme angles, and you can’t return it short. If you return the deep serve passively, you are giving your opponent lots of time to set up his best shot. So don’t.

Instead, get in the habit of attacking deep serves. Ideally you should loop them. If you make mistakes at first (you will), then that’s the best reason to keep attacking them – to learn to attack them. The more you do it, the better you’ll get at it, and your level will go up.

The key is to practice attacking them, generally by looping, both in games and in practice. I’ve seen many players lose a match because they couldn’t return serves effectively – and later they’d be off practicing their strokes rather than practicing return of serve. If you have trouble attacking a deep serve (or any other serve return), find someone who can do the serves that give you trouble, and practice against them, either in a practice session or matches.

There will always be exceptions to the “rule” of attacking deep serves. For example, some players have trouble against backspin, and against them you might want to push deep backspin serves. Or you might want to roll back a serve with soft, defensive topspin if the opponent has trouble with that. But these are generally tactics for lower-level play, and if your goal is to win at a lower level, then by all means continue to return deep serves passively.

At higher levels, there are players who do return deep serves defensively, such as choppers, who may return a deep serve with a defensive backspin, but even here the backspin returns may be fairly aggressive, i.e. heavy, deep, and angled. And there are high-level players who are not good against backspin, and so relatively passive backspin returns might be effective, especially as a changeup. And if you are attacking most serves, then an occasional defensive return is a good changeup against some players.

But these are the exceptions. A player may get away with passive returns of a deep serve, but the key here is they are getting away with a weakness when they could be better players if they returned the serve by being aggressive. Rather than cover for a weakness, why not make attacking deep serves a strength?