When ‘the little ball moved the big ball’ four decades ago

It has been 40 years since pingpong diplomacy helped pave the way for China to enter the world’s community. 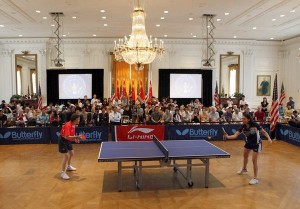 Zheng Huaiying of China and Judy Hoarfrost of the U.S. play a rematch of their 1971 pingpong diplomacy match on Thursday at the Richard Nixon Presidential Library and Museum in Yorba Linda. (Mark Boster / Los Angeles Times)

Tim Boggan is growing tired of the diplomacy involved in celebrating pingpong diplomacy.

In 1971, the table tennis historian was one of the first Americans to enter China since 1949. But he says the speeches commemorating the 40-year anniversary are full of “niceties” and “politeness” to the point that nobody listens.

So when Boggan rises to talk about his unlikely trip to China — he has done so six times this week — he delivers an original oration every time. At the Nixon Library in Yorba Linda on Thursday night, Boggan offered a candid and occasionally uncomfortable talk about his chance encounter with a “Chinese mystery man” who sought Boggan out simply to return his pen. Their 10-second conversation left a lasting impression.

“I saw him as a person with integrity, a person who had dreams, who was solid for China and wanted absolutely the best for much more than himself,” Boggan said. “This guy is important, and I hardly saw him really. … But there was something there.”

Boggan, 80, thinks too much gets made of the matches credited with thawing U.S.-China relations. And yet, something about Boggan’s personal interaction with the Chinese diplomat has stuck with him all those years. Experts, diplomats and table tennis players alike seem to agree that sports competition breeds personal interaction, and such interaction can, in President Richard Nixon’s words, “change the world.”

On Friday the Richard Nixon Foundation commemorated the 40th anniversary of what became known as pingpong diplomacy — though the more formal name of the sport is table tennis. The day’s program featured two rematches between the Chinese and American players who initiated Sino-American relations using their paddles and feather-weight balls. A packed morning at the Nixon Library included everything from speeches to Chinese drum girl performances to high-level table tennis matches. Players signed autographs and one travel-study group from Beijing filled a third of the stands.

“It is the pingpong that got the two countries together,” said Qiu Shaofang, China’s consul general in Los Angeles. “It is a long story.”

The story begins in 1949, when the Communist Party of China drove nationalists to Taiwan and paved the way for Mao Tse-tung to establish the People’s Republic of China on the mainland. The United States refused to formally recognize the PRC, and the icy relationship between the countries became a major contributor to Cold War tension for decades. The United States and the PRC opposed each other in two wars, the U.S. placed a trading embargo on the PRC and staunchly defended the nationalist Chinese government in Taiwan.

“It’s hard for us to really understand just how little direct contact Americans and Chinese had with each other,” said Clayton Dube, associate director of USC’s U.S.-China Institute. “It was a place that was much talked about, and it was a place where the imagination ran wild.”

In the years leading up to 1971, however, leadership from both countries was sending signals that they might wish to normalize relations. Secret meetings were held in Warsaw in the 1950s, and before his presidency, Nixon had written that “China needs to be brought into the world community.”

So the stage was set for the 1971 World Table Tennis Championships in Japan, where the two teams initially met. One afternoon, Glenn Cowan missed the American team bus, and a Chinese player waved him onto the Chinese team bus. More than halfway into the ride, Zhuang Zedong moved up from his seat in the back to greet the American and presented Cowan with a silk portrait of the Huangshan Mountains. When the pair stepped off the bus together, photographers were there to meet them.

“Zedong broke the rules,” Dube said. “Chinese players were not supposed to be fraternizing with specifically American players. It’s a local guy who winds up on the bus in Tokyo and the senior person extends this gesture of friendship. It’s really quite remarkable.”

What happens next is unclear. But officials from both teams expressed interest in a visit, and an invitation and acceptance came quickly. On April 10, nine players plus officials, spouses and journalists crossed a bridge from Hong Kong to China. The group spent a week playing table tennis and sightseeing.

The visit paved the way for Henry Kissinger to conduct a secret visit to China in July, which set up Nixon’s historic visit in February 1972. The U.S. then formally recognized that there was only one China and thereby set the Taiwan question aside to normalize relations.

Nixon called it “the week that changed the world,” but Wei Wang remembers the words of Chairman Mao. She was a child in the early 1970s and says she doesn’t recall much about the events. But the former U.S. Olympian and current Westside Table Tennis Center instructor does remember one thing clearly.

We had a great day time of playing table tennis at Paddle Palace Club in Portland, Oregon on April 6, 2022! Thanks to all the PPC members and drop-in guest...