On July 27, 1953, a country and its culture were formally ripped apart.

That was the day that the countries North Korea and South Korea came to be, separated at the infamous 38th Parallel.

But in 1991, the sport of table tennis brought hope and inspiration to Koreans worldwide. It was a moment in time that many will never forget. 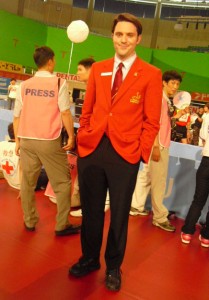 Mike Meier of USA plays the role of head umpire in the movie's final match.

“Korea”, the movie coming to theaters early next year, is based on the true story of the South Korean and North Korean women’s table tennis teams combining forces at the World Table Tennis Championships in Chiba, Japan. The story is shown through the eyes of Hyun Jung Hwa, the 1988 Olympic Gold Medalist, former South Korea National Team head coach, as well as national hero and celebrity. Hyun herself played a large part in the creation of the movie, everything from editing scripts for writers, to coaching the actors/players the proper table tennis technique.

“This has been a lot of work, but so much fun,” Hyun Jung Hwa said. “I’m very happy to be able to tell this story to the world.”

But just like the current divisiveness and back biting between the two countries, team Korea does not get along well from the beginning.

Hyun Jung Hwa’s rivalry with North Korea’s Lee Bun Hee is stirred a great deal. Hyun is played by Ha Ji-Won, while Lee Bun Hee is played by Bae Doo Na, both of whom are extremely famous actors in South Korea. Ha Ji-Won’s new film “Sector Seven” will be shown in more than 30 countries, while Bae Doo Na may be featured in a big-budget Hollywood film sometime next year. The producer of the movie, Kim Ji Hye, was excited to land the two stars and hopes their celebrity status will shine a big spotlight on the sport of table tennis.

“To have both actors star in the same movie is absolutely amazing,” Kim Ji Hye said. “Both have trained very hard and now play table tennis very well. I trust that fans of the sport will not be disappointed!”

After the team commences its training camp in Chiba, both the players and coaches learn how their practice styles, not to mention their lifestyles, differ dramatically. But through focusing on their common heritage, the team truly becomes one.

“It wasn’t South Korea and North Korea,” Hyun said. “It was just Korea as one, at least for a short time.”

The unified Korea squad reaches the semifinals, but North Korea government officials call for the team to dissolve, citing a breach in discipline. Yet the team continues to compete, defeating the ever-powerful Chinese team in an intense final match.

“China has always been a strong team,” Hyun said. “But just like in the real World Championships, we played our hearts out and won the title in dramatic fashion.”

The film is currently scheduled to be released in South Korea in January or February 2012. But now, with current interest by other countries to show the movie, the film’s producer would love to make that happen.
“Koreans know about Hyun Jung Hwa and the 1991 World Championships,” Kim Ji Hye said. “I hope other people, regardless of where they live, will enjoy the movie, too.”

Mike Meier, graduate of the Texas Wesleyan University table tennis team in 2007 and current international umpire, has a role in the movie as well. Meier is the head umpire of the movie’s final match, as well as a table tennis rules consultant, helping make sure the rules are abided by throughout the film. Meier has lived and worked in Korea now for more than a year.

For more information about the movie, you can visit http://www.hancinema.net/korean_movie_Korea.php