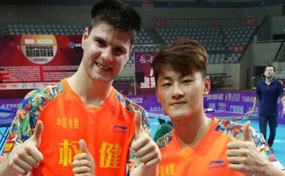 A translation of an article that appeared on June 10 at MyTischTennis.de The original version (in German) is available here.

10/06/2015 – After two less successful performances in the Chinese Super League, Dimitrij Ovtcharov’s team celebrated on Tuesday its first two victories this season in the strongest league in the world. His club Jiangsu had a 3: 1 victory over Guangdong.

After Ovtcharov’s teammate, Zheng Peng helped Jiangsu with his 3: 0 victory, it was the German who faced the world’s No. 18 Wong Chun Ting from Hong Kong . With a 2: 1-set lead, Ovtcharov and Wong were very close, but the European singles champions nosed ahead.

Then, in the deciding match, Ovtcharov also defeated Liu Jikang 3: 1 to close out the match for Jiangsu. After the game, Dimitrij Ovtcharov explained on his Facebook page: “3: 1 victory over Guangdong 4000 spectators I was able to contribute two individual victories on my first home game and am very happy that I held the third point… Tomorrow we goe to Baku at the European Games and I am very happy to meet my teammates Patti and Timo there”.

China’s top players made appearances with no upsets: Champion Ma Long won his two matches in singles over Ma Te and Chuang Chih-Yuan without dropping a set and helped his team Ningbo take a 3: 1 victory over Tianjin. Fan Zhendong (Bayi) won both of his singles match against Liu Yi and the World Cup participant Liang Jingkung in the Match against Timo Boll’s future club Shandong Weiqiao. Nevertheless, the Boll-club won at the end by a 3: 2 score. In the clash between Shanghai and Shandong Luneng, it came down to the World Cup quarter-finalists with Xu Xin facing Fang Bo. Unlike in Suzhou, Xu Xin kept the upper hand as he won in five sets and helped with the 3:0 win in Shanghai.