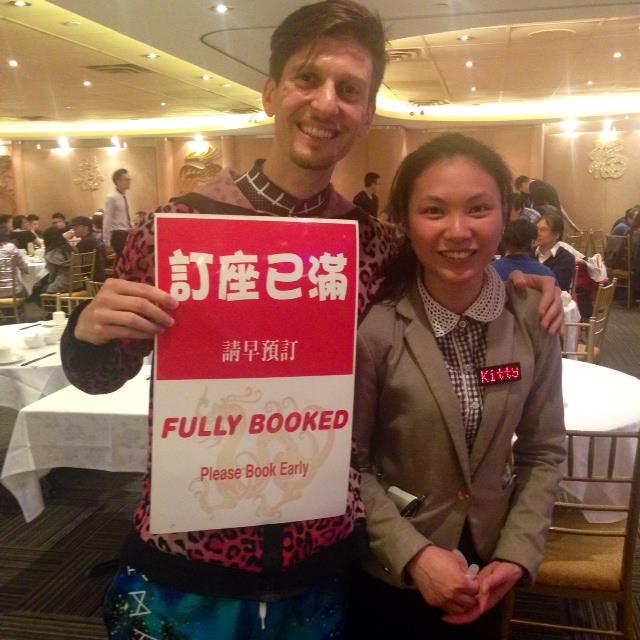 Today, I played at the biggest table tennis club in Canada with 43 tables (that’s CRAZY) and after members saw my style of play, they started coming over and lined up to challenge me. After a few hours of crashing through barriers and bruising myself up… the VP of the club took me to the North America Cup, and dragged me out kicking and screaming as a group of 7 others were waiting for us at a special Cantonese restaurant.

The restaurant was packed and there was a sign on the door that said “FULLY BOOKED: please book early” and the VP of CCTTA told me that they had to book way in advance. We walk in and he walks me right into the kitchen. I thought “umm… uhhh… are you SURE we’re supposed to be here?” and then suddenly we were in a smaller private room. I thought, “whoa! BALLIN’!” but then we didn’t sit down. We walked into a kitchen again. Sigh. I thought we were sitting in the VIP room. So we’re now in another kitchen and on the other side of that was an even MORE private VIP room and it had a ping pong table in it.

The president of CCTTA, the VP of Double Fish and his translator were there as well. The owner came over to us and talked table tennis, thanked us graciously for coming in and then the festivities began.

Now, as you might know, I am interested in health (despite my sleep schedule), and recently I learned and have been applying the “rule of 80%”… where you don’t eat until you are so full that you can’t anymore, you stop when you feel satisfied or no longer hungry… which ideally is 80% full.

So we get through the 3rd dish on the table and I am thinking “that was a good meal.” Then they brought out two giant plates of lobsters in garlic, and then ANOTHER huge dish of seafood came out, then a plate full of veggies and they said “Adam, this one is specifically for you.” Anyway, several other dishes came out before dessert and I tasted little bits here and there, but found it pretty cool that we essentially walked through two secret doors to get to a place that the overwhelming majority of the restaurant didn’t know existed at a restaurant that had a sign up basically saying …not, “there will be an hour wait” or “we’ll call you when your table is ready” simply “fully booked” basically “Go Home.” It was definitely a great meal.

LA Ping-Ponger | NCTTA Fan | ITTF/WTT Voice | PingPodder | Table Tennis Ambassador Yasi is strong. And while we are the same page about growing the sport, we are...