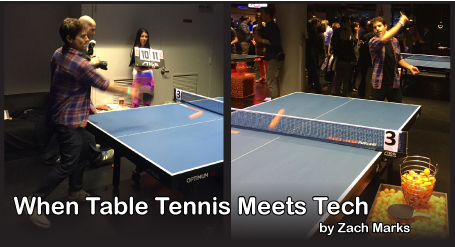 All the ingredients of today’s tech bubble were there — venture capitalists, angel investors, and start-up founders wearing t-shirts with company logos. Amid discussion of scalable software solutions, Series Seeds, and Series Cs, one could hear the steady ping and pong of ball hitting table and paddle, the noise echoing through SPiN, a Manhattan social club that usually rents out tables for $100 an hour.

As a hustling entrepreneur trying to make it in the tech world, I decided on a whim to join a ping pong tournament hosted by a venture capital firm. I figured I would get eliminated in the first round, then take advantage of the opportunity to mingle with investors over free food and drinks. I went hoping to meet titans of the industry and learn lessons in building a disruptive business; instead I disrupted a ping pong bracket and met a titan of the table tennis world.

I didn’t have high expectations going into the 32-person singles tournament. My game was pretty sharp at its peak in high school, when I played in my basement with friends on the weekends. But it was always basement ping pong. I never reached the next level of wicked spin serves and forehands so powerful that rallies took place standing 15 feet from the table — my basement didn’t have that kind of space.

Illuminated by purple neon lights, SPiN felt like a nightclub. Sped-up dance floor hits pulsed through the hall and bartenders in tight black outfits served cocktails. It felt like a place I’d see people slamming tequila shots at the bar. Instead, they were slamming ping pong shots at tables. I wasn’t playing in my basement anymore.

My first opponent was a venture capitalist. It was clear from our first rally he was better than me, and I was worried my run as a competitive ping pong player would be over quickly. But I hung in there, hitting a steady stream of defensive returns and his balls started to sail long. When his final slam missed the table, I couldn’t keep a surprised smile from creeping over my face.

I walked to the center of the room to report my result to the scorekeeper, a woman in hot pink tights with an accent I couldn’t place. She wrote my name into the second round of the bracket, then laughed when I asked if I could take a picture of the whiteboard. I didn’t know how much longer this would last and I wanted to enjoy it.

Next I was to face Dave*, the founder of a popular iPhone app. While we warmed up, he good-naturedly asked about my company. In this world, to do anything less than “crush it” is to admit defeat. I told Dave we were in fact crushing it. After several months of hard work, my co-founders and I were seeing traction on our start-up, an online marketplace that connects people with jobs based on their skills. We have paying clients, investors and a few thousand users testing our initial product in private Beta. But I was a small fish compared to the other players in the tournament, some of whom had sold companies for hundreds of millions.

As Dave dropped a nasty serve that jumped sideways, he talked about his success raising multiple rounds of venture financing. I flailed trying to return his serve and felt like I didn’t belong at the table or in the start-up scene at all. But I played above my level, and fought to a 12–12 tie (the tournament games went to 15). I dug deep, thought about crushing it, and came away with a win. Impressed, Dave offered to introduce me to one of his investors, but I was too focused on ping pong. I walked over to the scorekeeper, beaming. She gave me a thumbs up, seeming a bit surprised to hear I had won again, and wrote my name in the third round of the bracket.

The Elite Eight brought Ryan, an intimidatingly handsome product manager for a sexy financial technology start-up. Ryan’s colleagues circled the table to cheer him on. I was playing in enemy territory. I blocked out the groupies and channeled my inner Reggie Miller-at-the-Garden. By the time Ryan realized I couldn’t return his drop shots, he had squandered a three-point lead and I closed out the match with five straight service points. When I reported my victory, the scorekeeper high-fived me and shouted “Final Four!”

Next was Hari, the CEO of an open source database company that has raised several hundred millions. If I was trying to climb the tech ladder, Hari was already at the top, having sold his previous company for nearly a billion dollars. His game was as overwhelming as his net worth. His backhand was as dangerous as his forehand. There was nowhere to hide and I had to hold on for dear life.

A small crowd led by the scorekeeper began to root for me. Perhaps they were amused that this founder of a start-up no one had heard of was hanging in with an industry titan. Perhaps they just liked that I kept taking pictures of the bracket. I fed off the crowd’s energy and wore Hari down, winning 15–11. He shook my hand and slipped away before I could give him my pitch.

Suddenly I was one match away from the championship. I had somehow made it through the tournament without being exposed as the basement ping pong phony I was. All that stood between me and the title was Sunil, founder and CEO of an online marketplace that had been acquired by Groupon.

The thumping electronic dance music music shut off. The scorekeeper took the microphone and called attention to the center table. Innovators and investors took a break from discussing volatile valuations to gather around the table and see what I had left in my basement-honed arsenal. I went up 9–6 and could taste victory. Then Sunil came roaring back. My palms grew slick with sweat as he bought himself four match points with a 14–10 lead. I went on a 3-point run, cutting the lead to 1. It wasn’t enough. Sunil’s tricky spin sent my backhand into the net and he took the crown, 15–13.

I was devastated. Then the scorekeeper came around to boost my spirits. “Do you want to hit?” she asked. I had assumed she was the host venue’s version of a boxing ring girl, an attractive assistant without much interest in the athletic action around her. From our first rally, it was clear I was very wrong. She returned shots behind her back, with either hand, even with her eyes closed — the ball landing exactly where she wanted every time. Malin Pettersson was not just a scorekeeper. She was a ping pong pro.

Malin, who grew up in Sweden, said she had been playing since she was 3, when she stood on boxes to reach the table. I asked if she’d ever won a national championship. She modestly replied that she had. “When was that?” I asked. “Well,” she replied, “It was actually 14 times between 2002 and 2010.”

So there I was. I hadn’t met the entrepreneur who would give me eye-opening advice or the VC who would invest a few million, but I had met Malin Pettersson, the 14-time national ping pong champion of Sweden, and had disrupted the tech world with my basement ping pong skills.