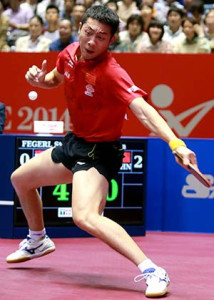 You practiced hours on end with Xu Xin but came home to lose your matches. Why?!

Why Does This Consistently Happen?
by Samson Dubina

Sometimes players will work very hard over the summer training many hours each day. But at the end of the summer, they play in a table tennis tournament and are very disappointed with their results. They might have spent thousands of dollars traveling to China, hiring pro coaches, and giving great effort… but still they didn’t have the expected results.

Yet other times, players will take a break for a few weeks and practice very little. Without expecting much from their first tournament of the season, these players are sometimes surprised with amazing results!

So, why does this happen to so many players?

Actually, I think that there are several possible reasons…

#1) Sometimes players who aren’t expecting much are able to play worry-free, relaxed without effort. While others who have trained very very hard put too many unnecessary expectations on themselves and the pressure hurts their performance.

#2) Sometimes players who are training hard every day are making positive changes to their games – new strokes, new serves, and new strategies. Before these players can properly implement their new weapons, they first must player many practice matches and tournaments before perfecting these new elements. On the other hand, players who haven’t been practicing much might not be so worried about the exact technique used.

#3) Sometimes game styles have a huge impact into the performance of many players. If these players are matched up against ideal styles, they can play well. However, if they are matched up against difficult styles, these players may play poorly. For example, if a group of players practice speed work for 6 hours per day in China, they might have difficulty playing slow blockers or choppers.

Regardless of the outcome, these players must remember that practice is a necessary element to long-term major improvement. Just because they had one great performance after a 4-week vacation, does NOT mean they will continue to have great tournaments without practice. Consistent practice while making positive changes with the help from a coach is the best way to improve long term.

How to Watch a Professional Table Tennis Player, by Samson Dubina