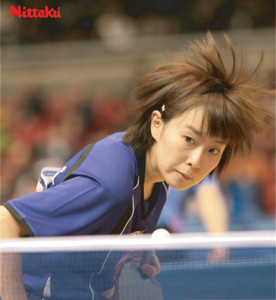 If you are an offensive player, there are 2 aspects of the game that you need to master.

The first aspect is… Creating the opportunity to attack first.
I hear many club players telling themselves throughout the night, “Just use your attack!” Well that sounds nice, but how are you going to create the opportunity? There are several ways:

3. Serve short and push short so that your opponent can’t easily loop first

4. Loop most of the long pushes

5. Loop most of the flips

After you make the opening attack, continue the attack by following up with another ball and another ball. Against a good player, it will likely take 3-4 strong attacks to win the point.

The second aspect is… Being consistent in your attack.
Even if you can create the opportunity to attack, that doesn’t mean that you will win; it merely means that you have the ability to attack. Your target goal should be to make 80-90% of your attacks land successfully with both your backhand and your forehand. If 100% of your opening attacks are on and you are still losing, then you possibly need to give more spin variation, speed variation, and placement variation. If you are inconsistent with your attacks, then consider adjusting your technique in the following ways:

2. Read the amount of spin that your opponent is giving you

4. Adjust the length of your swing based on the speed of the ball

5. Adjust your racket angle based on the spin on the ball

6. Focus on spin as your primary weapon and use speed as your secondary weapon