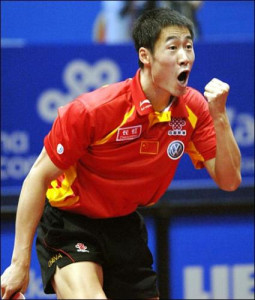 There are several keys that you must remember when playing deuce games.

#2 The second key to remember is… what you did wrong. You have lost 10 points during the game and you must have a clear memory as to which serves didn’t work well to setup your game and which serves or patterns that your opponent used to win points. Step back and ask yourself, “If my opponent serves that same tricky serve again, what would I do differently to return it?”

#4 The next point to remember is… to take your time between points. Winning a close game is mostly about your mental performance. You have already showed that you can perform at the same level as this other player during the last 10 points. If you are able to take your time, think clearly, and play smart, you should be able to win. Also, consider taking a timeout near the end of the game as well.

#5 The next point to remember is… winning ugly is ok. You don’t have to finish the match with a jaw-dropping, standing-ovation, counterloop roller around the net. Do what you need to do to win. Don’t try to play for the crowd and don’t play for the highlight film.

#6 The final point that you must remember is…. have fun. Think of close games as a challenge. Instead of fearing deuce games, enjoy them!