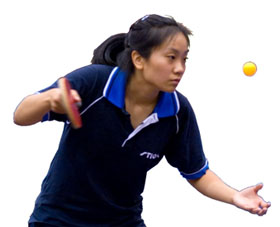 One of the most under-practiced aspects of serving is depth control. Most intermediate and advanced players know that serving short stops an opponent from looping. As players advance, they begin to see the advantage of serving short with the second bounce as deep as possible. This makes it harder for the opponent to flip or drop short, to return at a wide angle, or rush the server.

As they advance, players also begin to see that a deep serve that goes very deep, so the first bounce is near the opponent’s endline, is much more effective than a long serve that bounces more in the middle of the table. The deeper the bounce, the more you jam the receiver, force him off the table, cut off angles, and give yourself more time to react to his shot. (Deep serves can either be spin serves, fast serves, or a combination of both.)

You’d think that players would really focus on controlling the depth of their serves, making sure that the second bounce of a short serve and the first bounce of a long serve are both near the opponent’s endline. And yet few players really take the time to really learn to do this.

Draw a line on the far side of the table about four inches from the end, a few inches more for beginners. (You can use chalk, or perhaps just put a strong across the table.) Now get a bucket of balls, and practice your serves – but on every serve, make sure that either first or second bounce lands in the last four inches of the table. (Make sure that you don’t hold back on the spin on your spin serves or you defeat the whole purpose here. If you have trouble creating spin, focus on that before you worry too much about serving short with spin.) Don’t consciously aim; learn the feel of the serves that go the proper depth, and visualize doing it each time just before you actually do the serve. Ingrain the feel, and you’ll ingrain the serve.