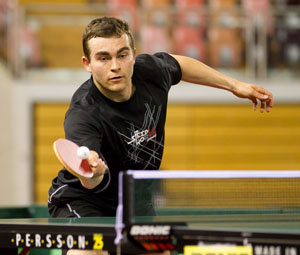 So often players push just to keep the ball in play. Push with purpose and placement! Always do something with the push. So, what can you do?

Placement: Many players don’t pay attention to this, they just get the ball back, and give the opponent his best shot, often a forehand loop. A push that lands six to twelve inches inside the backhand corner is easy to loop. A player with a strong forehand loop and decent footwork not only can use his forehand, but he doesn’t have to go that far out of position to do so. A push that goes right over the corner, angling away, or even outside the backhand corner, is a different story – it takes very fast footwork to use the forehand against that ball, and if your opponent does, he’s way out of position. Often he’ll be rushed, and either make a mistake, a weak shot, or (often underestimated) his shot will be easy to read since a rushed player isn’t very deceptive, and so his loop is easy to jab-block or counterloop away. (At the Teams in Nov., 2010, I coached a top cadet player to an upset over a 2350 player, with a major part of the strategy pushes to the very wide backhand. The opponent often stepped around and ripped them with his powerful forehand, but because he was rushed, his normally deceptive loop was easier to read, and so the cadet was able to block it back to the wide forehand over and over for winners.)

The other option is pushing to the wide forehand. If your racket is aimed toward the opponent’s backhand until the last second, and then you change and quick push to the forehand, your opponent’s going to have a hard time reacting. If he does attack it, you can now just block to his backhand, taking his forehand out of the equation. (This assumes his forehand is stronger than his backhand; if the reverse, go after the forehand again as the player moves back to cover his backhand.)

Table Tennis Tip: Going to the Well Too Often