Stage Three – Training for the Olympic Trials
By Samson Dubina
My choice of racket is a Nittaku Ludeak – composed of 85 grams of 7-ply all-wood construction. This blade gives me the right weight and power for my mid-distance counterlooping style. The Ludeak blade teamed with Narucross EX Hard rubber is the perfect combination. Narucross EX Hard is one of the world’s fastest rubbers and unlike many other tensor rubbers, Narucross has great touch for the short game. 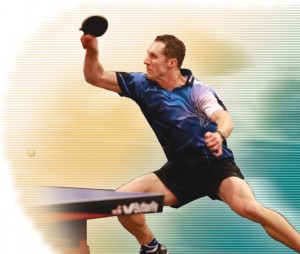 It’s now October 1st, and I’m eagerly moving forward to stage three of my training for the Olympic trials. During the first two stages, I was able to boost my physical conditioning, make some slight changes in my technique, and become overall more consistent in drilling. This article will outline some details about stage three: my drills, my physical training, my tournaments, and my improvements.

random locations. This is the base technique that I worked toward in stage two; however, this is not how a real game is actually played. In stage three, I’ll now be doing the same drills, but starting with a serve.

I initially want to make sure that my long game is solid. For a couple weeks during the month of October, I’ll be focusing on serving, having my trainer push long or flip, then playing the rally. Once I’m able to accurately loop the push or flip, I will add more variation to my opening loop by intentionally contacting the ball earlier or later, playing more spin or more speed.

Each day, I’ll also do the same footwork drills but have my partner serve for two drills. Drill one is looping serves; I’ll have him serve any spin medium or long. After attacking the serve, I’ll continue the footwork drill and try to maintain a rally of at least ten balls. Drill two is practicing my flip; I’ll have him serve short, followed by my flip, followed by the rally.

At the conclusion of each session, I’ll play a couple games. In the matches, I should feel that all the pieces of the puzzle are now coming together to form a solid game structure.

During stage three, I will focus less on physical conditioning. In the previous two stages, I needed to build a base of strength through weight-lifting and endurance through distance running. In this stage, I want to spend most of my time practicing table tennis specifically. I will be doing about twenty minutes of physical training, but most of this will be to improve my speed, not my strength. After table tennis practice each day, here are the exercises that I regularly perform:

With a very short workout, it doesn’t take much time away from my practice, yet it still improves my speed and helps maintain the base of conditioning from stages one and two.

During stage three, I plan to compete in seven tournaments. In these competitions, I will now be able to combine together the things that I’ve beeb practicing. After each match, it will be vitally important for me to record what went right and what went wrong. During the week, I’ll be studying these tournaments and improving for the next one.

Not only will I be thinking about my own game, but I will also be scouting my rival for the Olympic trials. Watching my opponents will give me a good idea on what to expect and how I should practice to beat them. Ideally, I would like to have a video of myself playing against each of them so that I can study it in more detail.

In the last couple months, I have made three positive changes to my game. First, I am using more wrist on both my forehand and backhand loops. This allows me to play in different gears and easily change the speed and spin, without signaling the changes to my opponent. Now, my opponents don’t feel as comfortable blocking my loop, and I’m also able to place the ball with more accuracy. Second, I improved my in-and-out footwork. By taking one extra mini-step, this allows me to get in better position to loop the ball at the top of the bounce. This is very important, especially when playing a blocker that varies the pace on his block. Finally, I improved my forehand power. By opening my stance more, I’m able to turn my hips and shoulders more easily to generate power with my body. These three improvements will help boost my level to be the best possible shape of the Olympic trials.