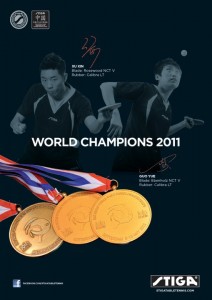 She also won bronze in the women´s singles event.

A fantastic World Championship for the STIGA Team!