Why is Sandpaper Illegal?

Why is Sandpaper Illegal? 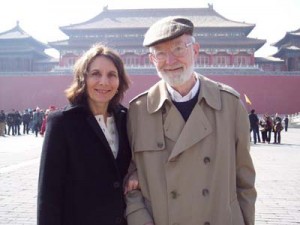 Rufford Harrison and Judy Hoarfrost in China in 2007

Why is Sandpaper Illegal?
And where do those Rules come from anyway?!

Countless times I’ve been asked why sandpaper is illegal, the last being when Judy [from Paddle Palace] called me a few days ago. But this time she asked me to put my thoughts on paper, which I had not previously done.

Would you believe that sandpaper is illegal because it scratches the ball? You wouldn’t? Good show; that isn’t the reason at all.

Let’s go back to 1952, to the World Championships in Bombay. There had been some rumors of a Japanese secret weapon, but they were dispelled completely when Hiroshi Satoh won the men’s singles. Not rumors any more, and no longer secret, this weapon was sponge, pure sponge, with no pimpled rubber on top, which was quite legal at that time. Everything was legal. I don’t recall the exact wording, but the law said something like, “The racket may be of any material, size, shape or weight.” You could play with a kippered herring or a dinner plate!

In fact, a decade earlier an American, Bill Rapp, had played with sponge. Although he had obtained some success with it, for reasons unknown to me his racket did not excite any great interest, and nothing happened.

But Satoh became the Men’s Singles Champion of the world, and that did excite some interest. A lot of it, in fact. Given the lack of restriction on the racket, table tennis became the stage for experimentation. We saw pure sponge, waffled sponge, thin sponge, thick sponge, a legion of combinations, rackets that were up to three inches thick. Second-rate players with no pretensions to international ability were winning tournaments over players of much higher intrinsic standard. The opponents had no idea what the rackets were doing to the ball — and neither, in many cases, did the racket wielders. The sport became worthless as a spectator spectacle, prompting world-wide discussion about what to do.

Most Associations did nothing but talk. The English Association banned everything except pimpled rubber, thus improving the spectacle in their own country, but putting their own players at a disadvantage when they played abroad.

Finally came the World Championships of 1959, in Dortmund, and the associated Biennial General Meeting (BMG), at which every Association present is represented. This is the only body that had the right to change a Law of the sport. The 1959 World Championships was my first, and I had been involved with all the discussion on racket standardization only peripherally. Furthermore, I have no notes from that period. But I recall that several “propositions”, (as motions before the BGM are called), were presented, ranging from outright ban of anything but pimpled rubber to very liberal proposals that would amount to virtually no ban at all. The chairman of the BGM was the then eternal president of the ITTF, Ivor Montagu, who was a master of the art of compromise. Who it was who wrote the finally accepted version I don’t know, but I’m sure that Ivor had a big hand in it.

It was realised that the problems with some of the post-Satoh rackets were two-fold: They were unpredictable if too thick, and pure sponge alone was too different from what had been hitherto generally accepted, namely “ordinary pimpled rubber”. So the compromise, the rule that we have today, was to limit the total thickness (4 mm if there was a layer of sponge, 2 mm if not), and to mandate that sponge must be covered by ordinary pimpled rubber. The one concession to the experiments of the previous seven years was to permit the pimpled rubber to be inverted. One other surface was permitted that is not allowed today, namely plain wood, which was felt to be quite innocuous.

But what about sandpaper, I hear you ask? Where did that get to? Just about every racket in every YMCA was sandpaper; why was it not permitted? I can only speculate on that, but my personal view is that no one thought of it. I can say with certainty that it was never mentioned in the BMG, and at that time there was no U.S. representative on the ITTF’s equipment committee to remind them of this widely used surface. In short, I think that sandpaper was made illegal accidentally.

But that doesn’t help you YMCA types: Sandpaper is nevertheless illegal.

written by Rufford Harrison for Paddle Palace
Rufford is the former ITTF Equipment Chairman. He wrote this article in 1998.

Courtesy of Seth Pech Recently I had the opportunity to try out the new tacky modern rubber K3 from Tibhar. Tibhar has been updating this rubber for many years and...

By Samson Dubina – Playing against Illegal serves is never fun. Here are some tips to make life a bit easier at your next event....

myTischtennis readers (Germany’s largest table tennis portal) have recently been able to take a close look at the green Rasanter R48 and the rubber completely convinced the testers:  In all...