A hotbed for coaching courses, Ajmer in India’s Rajasthan province was the recent home for yet another initiative organized under the auspices of the ITTF Development Programme.

Commencing on Thursday 12th April and concluding on Tuesday 17th April, an ITTF Level Two Course was staged; a total of 18 coaches attended on what was a second such course held in the city this year. The Course Conductor was Christian Lillieroos of the United States. 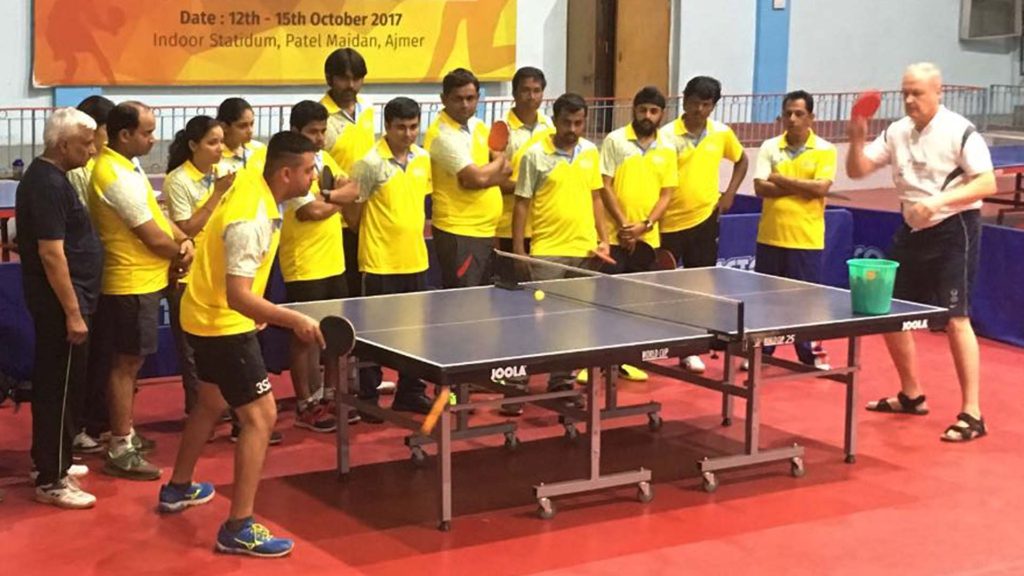 Notably last year they also hosted two consecutive courses; currently, in order to acquire a job as a coach in India, the ITTF Level One Coaches certificate is needed.

At the same time as the course was being held, the Commonwealth Games was taking place with India enjoying unprecedented success. They gained seven medals of which three were gold.

“The Commonwealth Games success was the talk of the town and sets up huge new possibilities for table tennis in India. It is also testament to the success of the new generation of high level Indian coaches. India now has 11 Level Three certified coaches, the highest in the world.” Christian Lillieroos

It was the second course from a series of five that Tenvic, an organization which promotes sports at grassroots level, in collaboration with Table Tennis Federation India will host in 2018.

“Mohan Kumar is the brain behind the high level of organisation of these courses and was present helping out every day of the course, sometimes acting as a universal translator. He speaks six Indian languages. The local person always there every day to help was Anil Dubey, the President of the Rajasthan Table Tennis Association. A very experienced organiser, he did a fantastic job. Notably present for the Opening Ceremony was Dhanraj Choudhary, the Secretary-General of the Table Tennis Federation of India. He has been the main supporter of the ITTF coaching scheme in India.” Christian Lillieroos

Notably, the results in this course were outstanding, it has always been a difficult task to make the theory part of ITTF Level Two of the course understood; this time the results were the best ever in the history of this course, anywhere in the world.

“Chintan Joshi from Gujarat set a new world record in finishing the theory with a perfect score in exactly four minutes. He gained a perfect 10 in the practical and was one of three coaches who finished with a perfect overall score of 20 marks. Also, the course had five perfect theory scores of 10. Aditya K. from Rajasthan finished the theory test with a perfect 10 in four minutes and 35 seconds; this was also below the previous world record but it was very short lived. Another overall perfect 20 score was recorded by Irvin Cordo from Goa. The third perfect score of 20 was performed by Satyajit C.R. from Bangalore. It is the first ITTF Level Two course where the theory results were better than the practical. “ Christian Lillieroos

Undoubtedly, the superb teamwork among the Indian coaches was a major contribution to the great results.

“The course had three female coaches who all passed with over 15 marks which means they can continue to Level Three. Ruchika Achha from Gujarat also had a perfect score in the theory part. Likewise, Mamata Prabhu from Maharashta, Shally Dhawan from Chandigarh all did a great job and we hope to see them all in Level Three.” Christian Lillieroos

Proceedings in Ajmer concluded, the next ITTF Level Two Coaches Course in India will be in Kolkata; once again Christian Lillieroos will be the Course Conductor.