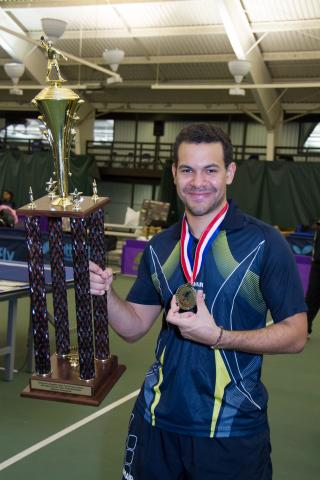 NCTTA being a team based league and organization, sometimes singles gets forgotten about, but it shouldn’t! NCTTA has singles competitions that take place in EVERY ONE of its divisions! For the tournament schedule, click here.
Joe Wells, VP of NCTTA says all of the time, “Have a shot at the Post Season through NCTTA Singles, why wouldn’t you!”
Lots of people think that they can qualify to the NCTTA Post Season only as a team, but there are other ways!
NCTTA has been offering singles since 2011 and every division in College Table Tennis has its own singles tournament.
Top singles players from both men and women are able to qualify into the post season with others qualifying through their individual rating via wildcard.
Collegiate singles has developed into a very strong event over the past couple of years. Division singles play has no limit for how many can sign up to play.
Go here (http://www.nctta.org/singles/) to sign up today!
See what you can win for playing singles: Emil Santos of Texas Wesleyan with his big winnings pictured here.
Paddle Palace and Tibhar are proud sponsors of the Texas Wesleyan University Table Tennis Team. Good luck to Emil Santos and the Rams as they fight to defend their national titles in 2018.
DHS is also one of the sponsors of NCTTA.

Shot of the Day – Nandan Naresh