Supported by Olympic Solidarity and organized under the auspices of the ITTF Development Programme, Pristina, the capital city of Kosovo was the recent home for an ITTF Level Two Course.

Proceedings commenced on Wednesday 1st November and concluded on Wednesday 8th November; usually, such a course is held over six days but it was extended an extra two days owing to translation and a tight schedule.

It was the first such course to be held in the country but it was the second time an ITTF Coaches Course had been held. Kosovo staged its first ITTF/PTT Level One course in 2011 and now has 24 certified Level One coaches.

A total of 16 students attended the Level Two Course; three members of the group were women, one from Austria and one from Albania. Nine enjoyed a full attendance and completed both the theory and practical tests.

Kosovo is part of Europe and is one of newest countries in the world; their main language is Albanian, which is close to Italian. It is considered the oldest language in Europe. Some people also speak Turkish.

Part of the former Yugoslavia, after a war of independence, Kosovo was recognized as a country in 2008, having been accepted as an ITTF member in 2003. In 2014 Kosovo became a member of the International Olympic Committee and competed in the Rio 2016 Olympic Games winning gold in women’s judo.

I had a long meeting with Besim Hasani, President of the Kosovo Olympic Committee; he explained many interesting facts about Kosovo. Sport, in general, has not yet received the attention it deserves but after the gold medal in Rio de Janeiro, sport received a much-needed boost. The government is working on a sport only tax deduction law that will help with much needed economic help for sports. Nobody is currently making a living from coaching table tennis in Kosovo. Almost all the infrastructure was destroyed in the war and it has taken a long time to build it up again.

The scores in the two tests, theory and practical had interesting results. Four students passed with sufficiently high marks to progress to Level Three. The main challenge was the theory, which is often the case in Level Two.

Linor Citaku, 26 years old, gained a perfect score of 20 marks. The challenge for all the coaches was that before they came to the course they had to work at their regular full-time job; for that reason, the course could not start until 4.00pm each weekday. The course finished 10pm each weeknight.

At the end of the evening, the coaches had to travel back home; for some, it was a one hour drive. The next day they started to work at 8.00am, a very grueling schedule each day. Notably, Lehat Citaku, the President of the Kosovo Table Tennis Federation was both the organizer and an active participant in the course.

Meanwhile, Fadil Luta works both as Secretary-General for the National Table Tennis Federation and for the Physical Education and Sports College in Pristina, gained a perfect score on the theory test and helped a great deal with interpretation.

It was a very enjoyable experience to work with such hard working enthusiastic coaches. They all appreciated the advanced course content and learned a great deal from the course. 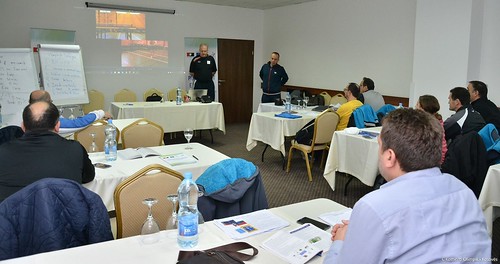