Just before the New Year, Ovtcharov spoke to Peter Hess of the Frankfurter Allgemeine news. The topics included problems with the new plastic balls, issues with his personal development as a player at home in Germany, how the Chinese have an advantage over non-Chinese in regard to access to the best equipment, and how European players should work together to raise their level in comparison to the Chinese. 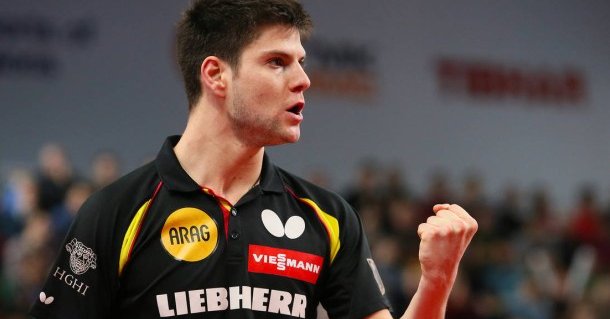 Key Quotes from the Interview:

“I’m not that happy with myself. I want to improve myself in the next 7 months till Rio Olympics. Better planning, set weekly and monthly goals and control how I achieve my goals. If I miss some days then Ma Long already has an advantage over me as he does not miss any day. I cannot accept that. I have to work hard.”

“I’m very happy with my coaching team (Jorgen Persson), and in the DTTZ we have Zhou Zhaoyong and Lei Yang training with Chinese knowledge. In china they have around 30-40 coaches, national coaches, China super-league coaches and their province team coaches. They develop each player with their own system and every coach knows what to do. They also do very simple exercises, there are no secret exercises they do.”

“In china they have 30 players in the A squad, that is why the young ones get so strong. When they are 15,16 years old and train with Ma Long they improve so quickly. If I go to World Tours and I train with non Chinese, they are not as good as the best Chinese players but better than the ones in our training group. The top European players need to get together to train. ”

“With the new plastic balls we had big problems as the quality of many manufacturers were not good enough. A lot of rally’s were getting destroyed by bad bounces, our training balls are so bad, it is frustrating as the rallies end a lot quicker. A new Japanese company is producing a new good plastic ball, we used it at the European championship. A lot of people realized that the rallies got longer and Pär Gerrell who always had a pretty poor backhand {{with the new balls}} could play one now, as the ball bounced hard and regular. He came in 3rd.”

“The event organizers promote the ball by using it and make money from it, so its not the best ball that is used, it’s the biggest company.”

“Rubbers are so much better from Chinese production, especially their forehand rubber which is only available to the Chinese National team players.”

“There are tournaments where everything is professional such as the German Open, China Open and Qatar Open. However there are tournaments with low quality of organization halls, hotels and the food is on a low level. Those tournaments are not good for the sport. If we can improve the balls and get equal with the equipment and just organize good tournaments then we would go into the right direction.”

“The prize money got reduced by 40% and is just 1.8 million dollars for all tournaments. In comparison five, six years ago it was 2.5 million dollars. At the Chinese Open the prize money is 15000 dollars and then minus tax. China Open is like the Wimbledon in tennis, this tournament you win just once a life in a lifetime or never and you get just 15000 dollars for it. At smaller tournaments you get maximum 2000 dollars, after flight, food and hotel you are in a minus.”

“I want another medal at the Olympics but a better color then bronze. I’m still hungry and table tennis is a job I love.”

#SDTTA Coach Samson Dubina introduces a new game/technology to make playing with your robot or multi-ball more fun – FastPong. If you can attend a SDTTA clinic or tournament, give...

Paddle Place is pleased to carry the Royal Series which is the latest racket series from STIGA. All made with different characteristics, from the well-renowned WRB-technology and Crystal-technology, to the...