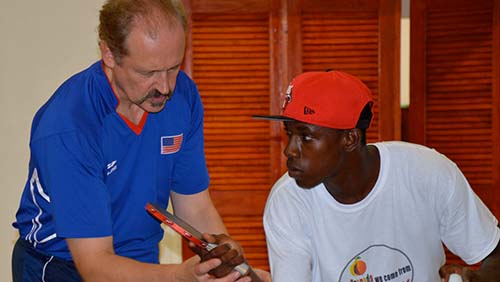 Timing is basic for all athletes that is a separate component that is more important than technique. If correct timing is learned first, the techniques learned become much easier. It is defined as:

1) where does all strokes start from

2) When and How to leave that starting position

3) How to change direction of your strokes and going forward

1) Where do all strokes start from?

The basic starting or ready position for your racket for all strokes is called the “Racket Neutral Position”. This position needs to accommodate Backhand and Forehand, fast and slow strokes, backspin and topspin, short and long balls. Your racket Neutral position is not favoring any strokes; it is equally ready for all strokes.

ii) The angle of the racket needs to be exactly 90 degrees in reference to the table, so as not to favor topspin or backspin in your forehand or backhand. The angle needs to be neutral.

iii) The height of the racket in the starting position needs to be above the table. When you play close to the table there is no reason to have the racket below the table.

iii) The ranges of movements of the body neutral position are about 25% of the table in either direction from the middle of the table. This range makes you be able to play 50% of the table forehand and back hand. Of course some players want to favor backhand or forehand, because they have specific strengths, then they will alter this in favor of their strength.

2) When and How to leave that starting (Neutral) position

This second principle of Timing is a life time process for a player and maybe the most difficult to master, but therefore maybe the most important principle for successful table tennis athletes.

i) When the ball leaves the racket of the opponent the first movement you make is to move the body in the direction of the where your opponent will hit the ball. At that moment you will know approximately where the ball will bounce, but not exactly and your body should move in that direction. When you do that movement your racket is still in the neutral position.

iii) How you move your racket in your backswing, is at the same speed and the direction of the bounce of the ball coming to you, no matter if you goal is to hit the ball hard or soft. That sets you racket movement up for the correct acceleration at the correct time.

v) It is very important to move your racket in the direction of the bounce of the opponent’s ball and the goal is to have your racket behind the ball most of the time.

3) How to change direction of your strokes and going forward

The move forward is divided in three parts.

i) The acceleration phase

i) The moments when you change direction of you stroke is where you determine the speed of you stroke. The best acceleration (if you are in balance) is done with your core that follows with your playing arm. If you desire a hard stroke (both backhand and forehand) you accelerate fast with your core (If the player has a physically functional core), which follows with a relaxed arm and wrist. If you desire a slower stroke the acceleration is slower.

ii) The contact phase. Research with high speed cameras has shown us that the ball stays on the racket from 1-3 1000’s of a second. This means that once the ball contacts the racket we cannot change anything while the ball is on the racket. Therefore the angle we use before and after the contact needs to be the same as our desired contact angle, as not to take any chances with such a short contact time. Even a millimeter in change of angle can generate an error in the stroke in table tennis.