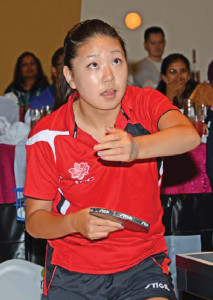 USA’s star, Lily Zhang, had outstanding wins in the USA matches against the top teams in the world in the Championship Division of the World TT Championships in Tokyo in May, 2014.

Lily won seven of her nine matches, defeating Szandra Pergel and Georgina Pota in the USA- Hungary match, Miao Miao in the Australia match, Alexandra Privalova and Viktoria Pavlovich in the Belarus match, and Andrea Todorovic and Ana-Maria Erdelji in the Serbia match. Her two defeats were against Yuka Ishigaki of Japan and Chen Szu-Yu of Chinese Taipei.

Lily is USA’s best hope for winning an Olympic Medal in Table Tennis. She is gearing up for the Youth Olympic Games taking place in Nanjing, China in August, 2014. Lily is currently ranked #5 in the World for youth under 18. In fact, she is the only player outside of Asia to be ranked in the top ten. Athletes aged from 15 to 18 from around the world compete every four years in YOG. A maximum of one male and one female can represent each country. Krishnateja Avvari, who trains with Lily at the STIGA ICC in Milpitas, CA, will be the USA male representative.

The table tennis portion of the YOG takes place at Wutaishan Gymnasium between August 17-23, 2014. There are 64 young athletes in total in this elite group, including 32 male and 32 female. There are three events: Men’s Women’s, and Mixed Doubles.

Lily and Krish with ICC Director Rajul Sheth, on their last day of training at ICC in July before leaving for China for the YOG.

To prepare for a peak performance at the YOG, Lily spent several weeks in Asia, training in China and competing in world-class tournaments. At the 2014 ITTF World Tour Korea Open – Super Series she was silver medalist for the Under 21 Women’s Singles event.

Lily’s training at ICC Table Tennis Club in Milpitas, CA has been critical to her rise to table tennis stardom. Her coach is internationally renowned Massimo Constantini, Head Coach of ICC. Krishnateja Avvari also trains at ICC. Says Lily, “without the training and support of ICC, it would be near impossible to rise to this level in table tennis”. When Lily returns from the YOG, she will attend UC Berkeley for her freshman year.

GOOD LUCK AT THE YOG!