You Can’t Stop Him 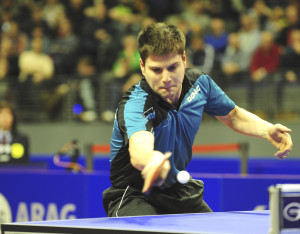 Dima Ovtcharov, leaning in for a short one.

What should you do?

Well, you must realize that with modern equipment and modern strokes, he will likely be able to attack all of your serves, regardless of how spinny, how low, and how short you serve.

The first key is to serve in such a way that he can’t tee-off hard on your serve. By mixing up long, short, and half-long serves it will be very difficult for him to attack strong. Also, if you serve very low, heavy backspin short to the forehand, your opponent probably won’t be able to produce much spin on the flip. If you serve to the backhand short, your opponent might be able to generate spin using the wrist – similar to Zhang Jike.

The second key is to learn how to attack the flip. If you merely block the flip, then your opponent will likely finish you off with a strong loop. If you are able to start your racket high, shorten your backswing, and loop with good control, then you will likely take the attack away from your opponent and he will usually block the next ball. Avoid blocking flips AND avoid hitting too hard against flips. Because the flip is so close to you, you don’t have much time to adjust to the various speeds, spins, and trajectories. So, watch where he is flipping, adjust with your feet, start your hand high, and loop with control to a good location.

There is no reason to get frustrated trying to completely STOP your opponent from flipping your serve, instead, serve in such a way that he cannot flip hard and BE PREPARED to attack his flip. A good example of how to attack flips can be seen in Dimitri Ovcharov’s match against Zhang Jike at the 2014 World Championship.