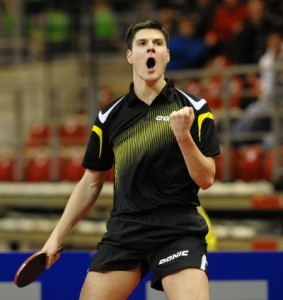 DONIC star Dimitrij Ovtcharov (Dima), the bronze medalist in the men’s singles, took his second medal with the German men’s team at the Olympic table tennis tournament in London.
In the match for the team bronze medal against Hong Kong, Ovtcharov proved that he is among the world best players. With a 3:1 (11,-11,9,9) success over Hong Kong’s top player, Dima had a great share in the 3:1 victory of the German team. He also proved his fighting heart and willpower, as he won the first set after being down 7:10 and the third after being behind 4:7.
“Ovtcharov as usual” you can say! “It would have been possible that the match turned out to be different”, said Ovtcharov, but I finally gave my best again.” In the past it had been a difficult task for TImo Boll to win over Leung Chu Yan. Leading 2:0 the favourite Germany seemed to be very close to victory. But then it became exciting again. For the first time at this tournament the coach of the men’s team Jörg Roßkopf didn’t chose Boll/Steger as its doubles team, but Ovtcharov/Steger. Jorg had to be afraid that due to the strong Hong Kong doubles team this point could be lost. The day before the doubles play Dimitrij Ovtcharov pointed out that he held Jiang Tianyi in high esteem. Jiang had won over Wang Hao at the China Open. Two years ago Jiang was very high in the world ranking but fell ill for a long time. Dima’s respect seemed to be justified. In the doubles competition Leung Chu Yan the left-hand player won against Steger/Ovtcharov 3:0. The final match was difficult for Boll due to the dangerous serves and top spins of the Hong Kong Chinese. After having lost the first set he won the second one with 11:5 after being behind 3:5. But then in the third round he caught up again. And even after winning 11:9 it didn’t get better. Quite the contrary: In the fourth set Jiang was 8:3 ahead, before Boll started his catch-up race. When it was 8:7 Hong Kong’s coach tried to save his protégé with a time-out, but it was too late. When it was 10:8 for Boll he turned a second match ball into 11:9. Then in the German box they immediately started to shout with joy: Boll, Roßkopf, Ovtcharov and Steger danced for joy and a few minutes later DONIC star Dima announced: “We have worked very hard for this moment and had to sacrifice a lot. Now we can celebrate!”