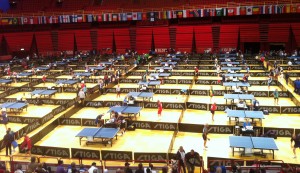 There are 3500 players from all over the world participating in the 16th World Veteran Table Tennis Championships in Stockholm, Sweden on June 25-30, 2012. The Ericsson Globe is the venue for the event and is widely known around the world for its spectacular shape. Sponsored by STIGA and with a total of 133 tables, this is the biggest tournament in table tennis.

Events include Mens and Womens Singles and Doubles, for players ages over 40, 50, 60, 65, 70, 75, and 80. Over 45 countries are represented this year. The oldest participant is 100 years old. His name is Kaptarenko Alexandra, from Russia.

The World Veterans Championships is a popular tournament taking place every two years. The first WVC was in May of 1982 in Gothenburg, Sweden. The tournament is highly sought after by the host countries. In 2006 it took place in Bremen, Germany, in 2008 it was hosted in Rio De Janeiro, Brazil, and in 2010 it took place in Hohhot, Inner Mongolia, China.

If you are over 40 and you love table tennis, traveling, and meeting players from around the world, think about playing in the next World Veterans Table Tennis Championships. The next one is in Auckland, New Zealand May 12-17, 2014.

Coaching Tip: The Game is All Mental