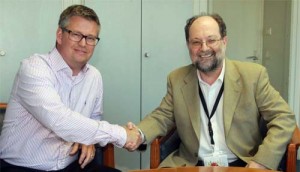 STIGA will be the Official Table Sponsor and Supplier for the 2013 and 2015 World Team Cup.

The agreement was signed at the recent LIEBHERR World Team Championships, which concluded in Dortmund on Sunday April 1, 2012.

“Over the years STIGA developed the reputation of producing the best wood products for our sport; the STIGA tables and STIGA blades have become synonymous with top quality table tennis products”, said Adham Sharara, ITTF President. “The ITTF is very happy to have STIGA come on board as a sponsor and official supplier for the prestigious World Team Cup in 2013 and 2015; this new partnership is hopefully just the beginning of a long and positive relationship between STIGA and the ITTF.”

Equally Mats Bandstigen, the Sports President and Chief Executive Officer of STIGA, was delighted with the agreement.
“STIGA is very happy and proud to become the Official Table Supplier of the World Team Cup 2013 and 2015”, he explained. “This important STIGA sponsorship is the latest of many efforts by STIGA to support table tennis worldwide.”

Chinese stars Xu Xin and Guo Yue are contracted to STIGA. They appreciate the quality of the company’s products as does Liu Guoliang, the current Head Coach of the Chinese Men’s Team. In 1996 Liu won the Men’s Singles gold at the Atlanta Olympic Games and three years later, the Men’s Singles World champion in Eindhoven, using a seven ply STIGA Clipper blade.

Anders Thunström, the Managing Director TMS International, was the person who guided Jan-Ove Waldner to Olympic gold in Barcelona in 1992 and one-year earlier Sweden, to the Men’s Team title at the World Championships in Chiba. “For me, growing up and playing on a STIGA Expert table, I feel it is great that STIGA is back on the world scene again”, he said. “I am confident we can provide excellent brand values for STIGA at the up-coming World Team Cups; we believe at TMS that it is a win-win for all parties”.

Coaching Tip: Where to Place Your Spin Serves