January ping pong in Amarillo. Last time we did this, it was a cool, dimly-lit garage in Olsen Park on one, single beat-up Stiga table that I bought on Craigslist from money I made from hocking my kids’ toys. HQ, epicenter, ground zero. I believe at the start of the tournament was a balmy January evening, about 50 degrees. I had a space heater in the garage to add a few degrees. That night, Eric Barry went 6-0 to take the owl home. There were 17 players and Richard Walton dashed after one match because of something exploded at homebase. We played a total of 30 games as this was the last tournament that we did single elimination before making the change to double-elimination in February, 2018. If memory serves me correctly, January 2018 was the night we added four new players and it felt like the wheels were about to come off. Andrew Rae, Darin Roberts,Darin Stollings and Tanner Exposito. Who were these guys and what in the hell were they doing in my garage? How did we get here? Why am I doing brackets in a freaking journal? I remember standing in awe, watching Stollings hit backhands with two hands on the racket.

So, from those humble beginnings playing in a crowded garage with 17 players playing 30 games on one table to 43 players playing 185 games on five tables, it almost feels like a freaking lifetime ago. If you’re counting at home, that’s over 500% growth in pong action since last January. I can tell you that, Sunday morning, I felt all 500% of it.

Also, worth noting, that January event, I received a message the public page from one Bethany Mezel asking “are these open to the public?” Now, at this time, we hadn’t had any female players even show interest yet. I didn’t know how to answer. I think I said something to the effect of, “Sure, no room tonight, but perhaps next month.” I remember asking how she found out because I got spooked that we had four new players and one random person asking about it. I think she said she saw it in her FB events feed. Twelve months later, the Mezel fam are fixtures in the league and often gracious hosts as well. Just shows how this thing builds out of a community, not a single person. It also shows how things can build meteorically by never saying no, but instead saying “yes…and…” at almost every juncture. Just a little lesson in cooperation and, moreover, community.

We had 48 players RSVP, a sell-out, and had 44 players show and even some players who were ready to fill in, probably could’ve played the full 48, but weren’t well-equipped for late additions. Definite room for improvement there. I had my hands full carting tables, picking up beer, making phone calls, grabbing rackets, hauling mugs, printing waivers, etc. By the time the doors opened at 6pm, I barely knew True North anymore. For early warm-ups, we had about ten players. The crowd began to build quicker by about 6:45pm. This is probably the earliest I’ve seen players show. Waivers were signed, complaints were raised about the need for age on the waivers, but largely, people understood.

This is a good place to pay some bills. First, Pizza Nomad who donated all the pies they made for this charity tournament. They collected not a single cent off of our event. I gotta tell you, Liberty knows what he’s doing and he loves the business. Eat his work and you’ll taste what I’m talking about.

Also, for the barley pops, Saint Arnold Brewing Company of Houston and Tracy Young and Shawn at Budweiser Distribution.

GAWK of Amarillo for the mug design. Dude is super cool and sent me that design over a text message. Next thing you know, it’s on a mug. However, bit no-thanks to discountmugs.com who gave me who sent me 72 mugs with the glorious PONG LIFE knuckle design reduced by 40% of it’s actual size. I told them since they gave me 40% of my design, I expected a 40% discount. It wasn’t much, but we got it. Mugs still look great, but no thanks to discountmugs.com. 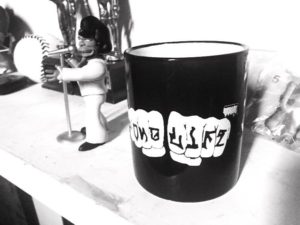 Travis Tidmore for the legal counsel. Guy had a family funeral this last week and still banged out a waiver for the event.

Sean O’Neill at Paddle Palace Club for the balls. Sean’s support and guidance is a huge asset. We hope to work together more in the future.

And a huge hug for the folks at Panhandle PBS, Kyle Arrant and the crew. When Drunk Monk Morgan came to me with the idea of doing it there, it sounded crazy, but the players were really blown away with the space. Lighting was great. I heard zero complaints and nothing but ovations for Panhandle PBS.

Shorty Hayes for use of the box truck. It ran like a dream and it had a freaking tommy lift. Total game changer for hauling tables. Josh Mezel, The People’s Champ Richard Walton, Cory Johnson for the tables.

And, lastly, the players who came through tremendously for Violet’s Cozy Toes. The mountain of donations was more than my precious daughter could even conceive when she saw it Sunday afternoon. I really had my doubts that we did as we well as we did. We gotta warm week here on the High Plains, but it drops next week. Donations will be readied and delivered shortly. You all made my family’s heart swell. For that, it’d be impossible to repay you. Thank you, thank you, thank you.

Onto the action. We jumped off the double elimination first to make some headway on the field. Needed to thin out the players a little while we had five tables popping. Early action in the Maceo Pool had Hank and Devin Damnright quickly jumping past Sandman Seth and Jinx, respectively. Noteworthy newcomer Bill Austin from Lubbock ethered Jinx and Operaman in the losers’ bracket of the upper pool until ALL CAPS Patrick knocked him out. Speaking of ALL CAPS, the guy has been putting in work. He beat Phillip Humbert in short order, took Gary to the brink only to lose, and then mowed through Bill Austin, Phillip Humbert again, and Hank to go three games against Not Very Good Gary again. It was a valiant effort and, upon working my way back through the bracket again, I’m moving ALL CAPS up into second place given the fact that he beat Phillip twice and Bill Austin who beat Operaman. The fractions of points that separate those guys is so tight that you could make a case for any order there. ALL CAPS went from 6-4 in November to 10-6 in January. Quite a turnaround.

But not as quite as a turnaround as one Matthew Wright who was winless in November, but rattled off a number of wins in the losers’ bracket of the Catfish Pool. After suffering a closely contested first round match against Drew Whipple, Matthew went on an absolute tear with ten straight wins only to ultimately lose to a second Whipple, young Coly.

Speaking of the Whipples, Drew wanted to make sure that the recap captured the fact that Drew whooped his son Coly’s ass. Although, I think Drew said “ass” with an “uh” at the end. It doesn’t matter, though, Coly came back around through in the bracket finals and took pops out. He who laughs last…

The elite bracket started about eight-fifteen. The Mr. Dynamite pool was a round robin consisting of Tracy Garvey, Jaime En Fuego, Stephen Miller (who was upgraded from last time after playing brilliantly in November), and two newcomers: Cole Ely from Liberal and John Moya of Amarillo. Now, I’ve been trying to get John Moya to play since February 3, 2018. A year later, the dude comes through and he certainly didn’t disappoint. But the round robin is a gauntlet. It proved difficult for John Moya as he failed to secure a win this time around. Meanwhile, it was clearly the Cole Ely and Tracy Garvey Show. After their first-round matchup, both put on an impressive expo with some show-stopping rallies. I know the conditions are not ideal for these players. It’s a challenge with our league. It’s hostile, loud, cramped. There are kids walking around, there’s no scorekeeper, no official, no water. Cole and Tracey were out there putting in work. As the round robin concluded, Tracy would reign victorious with Cole Ely in second, only suffering one loss to Tracy. When “Paid in Full” came on over the loudspeakers, I swear I saw Tracy dancing.

One of the most interesting brackets was the in-between bracket, the Bootsy pool. It featured a hodgepodge of players including a Curless. Now, I don’t know much about the Curless family, but I’m starting to sense that they are known in the local pong circles. Camron, a young’n had a shoulder injury so they sent in 11-year-old Dylan. From the second the kid took the table, it was on. It started with Dylan knocking out Curt Besselman and then going the distance with Brazo Fuerte. In the losers’ bracket, he knocked out Josh Fore and Kyle Merrill, both formidable opponents, only to lose to Ryan Turney. Ryan had a fine evening after suffering an early loss to Drunk Monk Morgan. Once he made it to the losers’ bracket, he stomped through Mighty Healthy, Bully Boyett, Dexter, Dylan, and Brazo Fuerte only to fall to Drunk Monk for a second match. Ultimately, Drunk Monk would face Not Very Good Gary for the Silver Terrapin with Gary winning.

As the crowd thinned out, Hank and Drunk Monk Morgan took the table for a little extended session. Watching these dudes ball is what the community is all about. It was like watching Rocky and Apollo sparring in a darkened gym. At one point, Hank got so pissed, he snapped a racket and discarded it like one would an empty bag of chips. But when he left, he was all smiles.

The Bear and the Bison Winner: Tracy Garvey

February tournament is February 9th. The Flying Saucer Tour of the American South. Should be a fun one. Back at The Spot. Here’s the signup link. Spots are limited so get in there.
https://www.eventbrite.com/e/feb-shakehands-the-flying-saucer-tour-tickets-53631675786?ref=eios&aff=eios

Hand on the plow, nose to the grind, pong on. 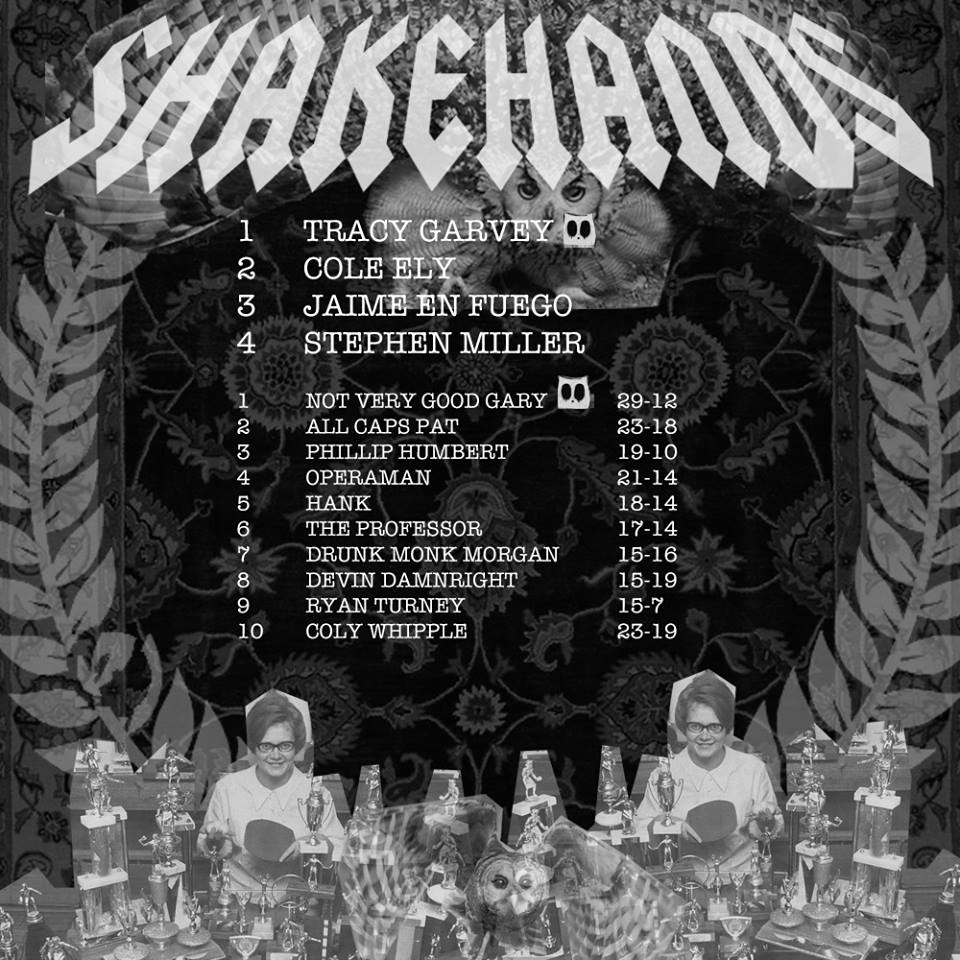 Sofia Polcanova – Ask a Pro Anything presented by andro