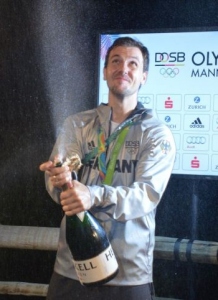 Rio de Janeiro – The GERMAN (DTTB) team celebrated their medals in the German House in Rios – with champagne showers, caipirinha (Brazil’s national cocktail) and music. Present were other prominent athletes, friends, acquaintances and even a star pianist. The return of the team began on Thursday evening. The joy of the home was overflowing. A short window to enjoy the moment – but not too much time especially for Timo Boll as he was already setting a goal for Tokyo 2020. The night was short for DTTB Men: Because mandatory press conference of the DOSB was at 9 pm, but the bronze medalists enjoyed the German house located in the Barra Rio da Tijuca district – a beautiful location near the beach.

On Wednesday, the German team had gone to German House with the Olympic team. As usual with medalists – Boll received ovations. During his Bronze medal match, Boll had suffered a neck blockage and needed the team physician Toni Kass to tend to him with syringes. Boll said on stage: “the caipirinhas here are also good anesthetic for my neck.” Each player had received a bottle, though there was a small drawback: the champagne had a relatively high temperature and was therefore not very palatable.

Lang Lang challenges Boll: There was a playful table tennis match between Boll and star pianist Lang Lang in the German house. Lang Lang plays table tennis pretty well – and, in return, Boll then had to tackle some piano keys. “Timo is very popular in China, people love him and I’m really happy to meet him for the first time,” said the piano virtuoso from the Middle Kingdom. For a photo shoot Lang Lang was awarded the bronze medal of Dimitrij Ovtcharov. “The win was really difficult,” says Lang. 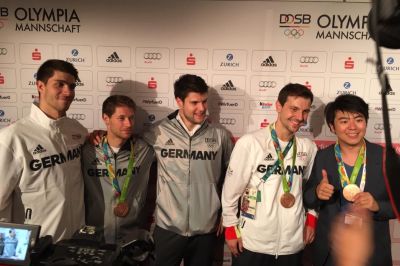 Tokyo 2020.? This question was probably asked Timo Boll a hundred times in Rio… and again in the German House. The record European champion replied: “I hope I’m in. I’ll definitely try and continue to operate on a similar level. But at 35 you do not know what happened yet physically. I’m ready to invest a lot and just hope that the body works in a similar context. Then Tokyo 2020 is possible. Boll will return to his tight training program. On Saturday, he plays an internal tournament for his club Borussia Dusseldorf before returning to China for benchmarking at the Euro-Asia Challenge. It has also been reported that Boll will play in the China Open in Chengdu.

Ovtcharov explained his new celebration – where he turns, looks to the audience, and pull with the right hand at a missing hat. This had not been seen previously from Dimitrij Ovtcharov. The 27 year old explained: “After my single defeat here we distracted ourselves by watching Golf. Where when the players sink an incredible putt, they always made ​​this gesture, a sign to the audience. I thought this was a cool gesture and wanted to incorporate it. In the first game in the team competition, I started it. I didn’t lose a game in the teams, it’s a nice celebration and a superstition that has brought me luck, “says” Dima “, who was certainly strained in Rio for the ambitious Olympic goals. His wife Jenny is nine months pregnant, and he hasn’t seen her for about three weeks. “I owe her so much,” the European champion has achieved his total fourth Olympic precious metal.

Han Ying soon see her daughter again, Solja hoping for good meat A big reunion is coming soon between mother and daughter. Han Ying has its Leonie while Rio missed so much that she had nightmares. “I dreamed when I see her again, she is suddenly 1.60 meters tall and grown up”, the Rio-quarter finalist said in an individual who had made ​​the decisive point in the semi-final thriller against Japan.
The silver-girls had been on Tuesday triggered the German house on their outstanding success. Petrissa Solja would be especially forward to seeing her family, but also edible meat. In May Olympic was the food – unlike the German house – apparently not so tense. “Throw ‘ever the Grill” Solja appealed on her Facebook page gen Palatine home. The 22-year-old moves from the recovered silver new motivation. “In my first Olympics to win silver, gives a lot of motivation. Because it’s fun to continue working. I am still young, just 22, and I’d like an era in women’s table tennis in Germany help shape “stresses Solja who should occupy in four years in Tokyo in 2020 a key role. For the national coach that is still far away. “After this silver medal I would only times do not think about the next Olympics.After my holiday I’ll go into the planning. I will then also lead individual conversations with all and ask what projects the players themselves. I also have young squad players who are very talented and ambitious. I think that would also like to be in Tokyo this, “says Schöpp. “I am now in a very good home. Rio and the preparation for it was a long time in which I’ve hardly seen my family. Now I take a long vacation. The girls I see only on September 19 again, when the preparations for the Euros with a course begins, “the national coach. 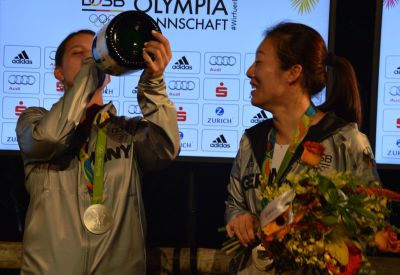 Schopps counterpart Jörg Rosskopf goodbye after arriving in Germany on Friday directly in a one-week vacation. “Rossi” flying volley continue “with a total of 18 people and five families to Mallorca. Families that I know for a long time from the kindergarten and school, friends from home. “End of August he sees again his national team and players in the squad when the Czech Open start. 2008 Silver, 2012 and 2016 Bronze what comes 2020?”We certainly have the right to continue forward to be there. This is of course difficult against Asian competitors. Japan will invest with security even more. South Korea, Hong Kong, Singapore, because there are many who also work really well. We have to see that we stay tuned because in the next four years. We want to play a role in the medals in Tokyo “. DTTB President takes stock At the end of the Games in Rio drew DTTB President Michael Geiger balance:” The teams have achieved excellent results, the best thing in the Olympics we have ever had. Our minimum objective we have met in the individual events, we wanted to be represented in both the ladies and in the men in the last eight. This is succeeded by Ying Han and Dimitrij Ovtcharov. To a medal hat’s time but unfortunately not enough as opposed to London. Even better is the performance of the teams. The ladies brought sensational silver and the men in a dramatic and outstanding match against South Korea bronze. Considering that table tennis in all sports with the most member associations and that we were in all competitions in the last eight – that would, for example, in track and field and in swimming final spots – and even in two of the four competitions won medals, then the Result outstanding. ”

The DTTB team celebrated in the German House in Rio their medals – with champagne showers, caipirinha and music. Present were other prominent athletes, friends, acquaintances and even a star pianist. The return of the team from Sugar began on Thursday evening. The joy of the home is large. Much time to breathe not remain especially Timo Boll, for the Tokyo 2020 goal. The night was short for DTTB Men: Because mandatory press conference of the DOSB at 9 pm takes place, the bronze medalist remained the same in the German house…

Olympians’ Equipment: Play Like the Pros with Paddle Palace