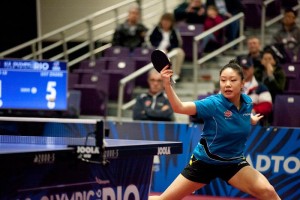 Thus far, Team USA is 0-3 with two matches remaining: top seed Hong Kong, and sixth seed Sweden. Hong Kong is undefeated in the group, so that will be an especially challenging match. Sweden is also 0-3, and winning that match could be enough to ensure that TeamUSA will stay in the Championship Division.

Wang Chen’s debut at the Worlds was one of the early high points for TeamUSA. She defeated World No 77 Youngsook Park of PRKorea 3-0. Wang Chen, who has been in retirement for two years showed she can still be one of the best – as she anchors the otherwise very young US team.

The match against Russia was also 0-3. Russia started strong across the board, winning the first game in all three matches, closing the tie out at 3-2, 3-1, 3-1.

Go HERE to watch all the matches of the 2016 Perfect World Team Table Tennis Championships.