This is a translation from a SPORT1 article titled: Krause, Ovtcharov and FCB.
(The original may be found here in German) The translation is Google with editing by Steve Hopkins. 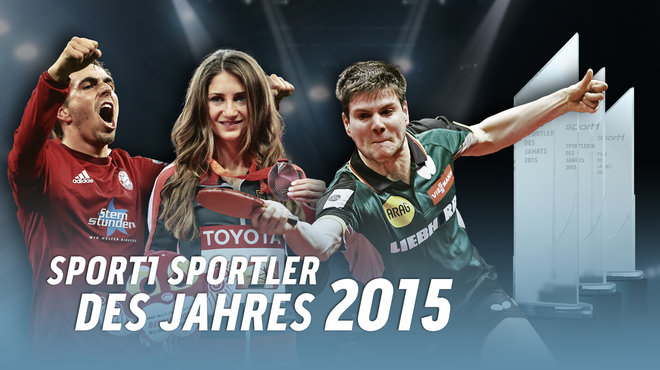 OVTCHAROV – GERMANY’S SPORTSMAN OF THE YEAR

Germany’s sports fans have chosen their Sportsman of the Year: Gesa Felicitas Krause, Dimitrij Ovtcharov and FC Bayern München win the SPORT1-sponsored prize for their success in 2015.

Germany’s largest audience-awarded prize in sport – the fans have chosen: Gesa Felicitas Krause, Dimitrij Ovtcharov and Bayern MunichMüller in Erklärungsnot have been awarded The SPORT1 award in the categories of “female athlete 2015”, “athlete 2015” and “Team 2015”. The award was chosen via secure online vote.

Each of the three categories contained ten athletes or teams, which exhibited great achievements in the year 2015th

The SPORT1: Ovtcharov defeated Thomas Müller
The 27-year-old won in the European Table Tennis Championships gold in singles, silver in the team and took the European Games Singles Title in Baku.

Thomas Müller finished second with 27 percent of the vote. The 26-year-old from the Upper Bavarian Pähl was Germany’s top scorer in the European Championship qualifiers and, thanks to its world-class services, was the new face of FC Bayern.

In third place was Severin Freund with 9 percent. As the first German for 14 years in ski jump to take from the Lower Bavarian Rastbüchl 2015 world championship gold on the large hill, silver on the normal hill and the overall World Cup victory.

Ovtcharov said: “The victory of this vote means a lot to me, it’s the fans who vote here and I have maintained myself against a super-sympathetic representatives of otherwise anything but dominant sport of football that makes me proud and grateful…”

Gesa Felicitas Krause: Gold at the Fan Awards for taking bronze at the World Championships in Track and Field

“Sportswoman 2015” was awarded by the fans with 23 percent of the vote to Gesa Felicitas Krause. The 23-year-old from the Hesse Ehringshausen won in 2015 at the World Championships in Athletics Bronze 3000m steeplechase – the first World Cup medal in the event for the German Athletics Federation for 14 years.

Second place went to Franziska Preuss, biathlete, with 16 percent. At the World Cup, the 21-year-old from the Upper Bavarian Albaching took the silver medal in the mass start, gold in the relay, and won in the 2014/15 season to start World Cup.

“Wow, thank you for this great award,” Krause said, just arrived at the training camp in Kenya: “I’m surprised at the high-profile competition and would be really happy Thank you to all those who have given me their vote This is a! great support and help during hard training on the way to Rio. ”

FC Bayern Munich: Star of the South also radiates the voting at its brightest

For “Team 2015” voted the users with 40 percent of the vote against FC Bayern München, the 2015, the 25 winning the German championship and celebrated with ten victories lay a record start to the 2015/16 season.

Bavaria Executive Sport Matthias Sammer said in training camp in Qatar: “Thank you to the users and viewers of SPORT1 for this great award. The team has the hard work. We are impressed and very grateful. ”

Since 2002 organizes SPORT1.de on its online portal SPORT1 – the choice of fans that has a high priority even in athletes due to the large number of participating users. In the previous election for the Sport 2014, the German national football team, Dirk Nowitzki and Andrea Petkovic had triumphed.