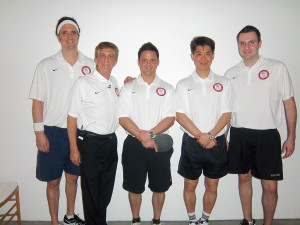 After have performed more than an estimated 3000 table tennis exhibitions around the world I must say this call from Jimmy Butler was different. Jimmy called me to see if I would handle an event for “The Menil Collection” a World Famous Museum Fundraiser in Houston, Texas. The host wanted only Olympians and National Champions so Jimmy and I assembled a team together to entertain our guests for 45 minutes.

As the rack of lamb, sushi and Chateau Margaux was cleared from the tables and the chocolate mousse was half digested we walked out to the middle of the dining area where there was a table tennis table with spotlights a full sound system and large screen TV with three cameras to capture the action. This would be the first time in all of these years that I would not hit a ball during the exhibition but just be the Master of Ceremonies. My biggest challenge was getting the four players away from the TV monitor that was showing the end of the Houston Rockets and Dallas Mavericks Game….

After introducing the rules and regulations Jimmy Butler and Mark Hazinski played a one-game revenge game from the 2014 Nationals where Jimmy defeated Mark in the Semi-Finals. Following the singles exhibition game then Eric Owens and David Zhuang came out to challenge Jimmy and Mark in doubles. The players hammed it up by lobbing long points and succumbing to the pressure of the lights and the tuxedos in the background.

Then the grand finally was playing challengers from the audience. And planted out there in his tuxedo was Niraj Oak, former 2400 player who lives in Houston. Niraj and Jimmy played a championship game and Niraj took the house down with his amazing returns and uncanny steady play. Jimmy finally prevailed at deuce.

I want to thank our hostess Ms.Elsian Cozens of the Menil Collection and to my wonderful exhibition team who I have had the honor of playing with and being friends with for many many years…

The full article by Molly Glentzer is attached below –

SOCIETY MEN OF MENIL NIGHT A REAL SMASH
There was boozin’, schmoozin’ and ping pong
By Molly Glentzer April 30, 2015

Co-chairs Michael Mithoff, from left, and Shannon Sasser, Menil director Josef Helfenstein, and co-chairs Russell Hawkins and Richard Lummis with their paddles at the 2015 Men of Menil fundraiser at Richmond Hall.
We’ve seen fashion photo shoots, dance performances and sumo wrestling through the glowing pastel lights of Dan Flavin’s installation at Richmond Hall, so why not something really bouncy? Say, table tennis?

Some of the 144 tuxedo-clad guys at the fifth Men of Menil evening even picked up paddles themselves for a few minutes at a Butterfly, the Rolls Royce of tables. The main event starred Olympians Jim Butler (a Houston native), Mark Hazinski, Eric Owens and David Zuang, with U.S. National Table Tennis coach and trainer Scott Preiss as master of ceremonies.

One thing the guests learned: If you’re serious about it, it’s not called “ping pong.” Just something to ponder as they ate a fancy-manly dinner of tuna tartare and rack of spring lamb by caterer Jackson Hicks on miniature sport tables then decamped to the brandy, whiskey and cigar tent.