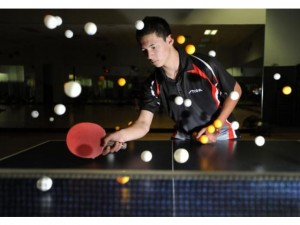 When he was 6, Austin Preiss remembers crying and slapping pingpong balls at his brother after the two would play on their basement table.

Now, Preiss, 17, has signed with Lindenwood College in St. Charles, Mo., one of the top table tennis colleges in the nation, to play table tennis and golf.

When he signed April 18, it wasn’t the first time Lindenwood table tennis coach Randy Kendle marveled about the Cheyenne Mountain student. “We played when he was about 12 in a tournament,” said Kendle, who was 47 at the time. “He beat me. He’s always been awfully good thanks in part to his dad doing so much for this sport.”

With his red-and-black STIGA endorsed paddle Preiss has toured 11 countries and more than half the states showing off his forehand and backhand opposite his father Scott, racking up 30,000 miles a year.

Austin has been on ESPN, “The Ellen Show” and “Good Morning America.” He’d wow the crowd as he’d serve it from 30 feet off the table, 70 feet — then return it with a clipboard, a book and a smart phone.

In tournaments he has won two state championships, nine national championships and a gold medal in the junior consolation singles at the World Maccabiah Games in Israel.

This fall he’ll go from the Rocky Mountains of Colorado to what Kendle calls the “mole hills” of the St. Louis area. The coach, who started the program in 2008, didn’t go on about Preiss’ bullet serve or his jaw-dropping awards … mostly just focused in on his mental game. “He’s been all over the world with his father and shows such a commitment to the sport,” he said. “He’s not intimidated with people watching him. He just has exactly what we’re looking for.”

Months after taking 11th at state in golf as a junior, Austin was four points away from claiming a spot on the U.S. table tennis national team. Up two games to one in Las Vegas, he led 7-4 (to 11) against opponent and friend Ethan Chua in a best-of-five. But after a timeout by Chua’s coach, Preiss lost his touch — crumbled and eventually lost.

Then in the fall another pebble was added to the sand trap he’d suddenly found himself in when he didn’t make his varsity high school golf team. He was stuck but not buried. “It all just motivated me,” the 5-foot-10 senior said. “It’s not an easy task to be a couple points away from making the national team and that gave me confidence knowing I was that close. It was eye-opening and was a turning point in my career. I just kept believing in myself.”

Preiss signed with a team that is made up of 90 percent international kids including the No. 1 and No. 2 collegiate players in the world Fernando Yamazato (Brazil) and Benkat Ramesch (India). It’s a remix of cultures but the spoken language remains English. “The college requires them to be pretty fluent in English to attend,” Kendle said. “So the communication on our team is very good. But we’re glad to get Austin because since we have so many kids from other countries we were really glad to get one from here too.”

There is no Division I or II — all 150 schools that spread into Canada are a part of the National Collegiate Table Tennis Association. The Lions have finished second twice in their four-year history at the NCTTA nationals and took third last year. Austin will try to make winning the championship as a team his goal in table tennis alongside making the Olympic Games in 2016 in golf or table tennis.

With graduation weeks away Austin can’t help but relive the past when he thinks to the future. Nestled in the basement, Austin hated to lose to his older brother Adam. He’d make target practice of him with handfuls of screaming pingpong balls.

As he grew, he’s a kid who would end up winning scores of awards; but neither his stack of titles nor his fame are the driving force for Austin as he heads into the next stage of his life. It was when his father came down to that blood-curdling basement. “I’ll always remember what he told me and that’s how I try to compose myself out there,” Austin said. “He said ‘it’s not about winning or losing’,” he related, “‘it’s how you play the game.