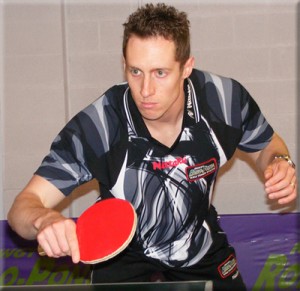 Over the next six months, I’ll be practicing for the 2012 Olympic Trials. Right now, I just finished the first stage of my training program, and I’m now moving forward with anticipation to the second stage. In each blog posting, I’ll be describing how my table tennis training progressed during the previous month and what I hope to accomplish in the next stage.

The first stage (July) consisted of rest and strengthening exercises. This stage was important because it allowed my table tennis muscles to rest and recover before the intense training began. During this time, I played other sports and focused on building my strength and endurance. I also did many exercises with my left arm to make sure that both sides of my body were equally balanced.

Second stage (August-September) will consist of intense footwork practice. Throughout this stage of training, I’m combining my physical preparation with my table tennis practice. The focus during these two months will be to play long rallies and have very strong footwork. During this period, I will begin playing tournaments but realizing that I won’t be at the peak of my game. I will also continue my strength and endurance training during this period.

Third stage (October-November) combines footwork with game situation drills. During this stage, I’ll continue my intense footwork but will begin most of the drills with a serve or serve return. Also, the footwork drills will be with the balls hit to random locations; this requires more concentration and makes the practice more “game-like.” My physical training will be centered-around speed and more of the conditioning will be table tennis specific. I’ll begin playing more tournaments and looking for better results.

Fourth stage (December-January) is the final preparation before the Olympic trials. During this stage, I’ll be focusing mostly on the technical side of table tennis, which includes: serve, serve return, short game, and match strategy. All of my conditioning will be table tennis specific. During this period, I’ll be playing at least two tournaments per month and will be focusing on applying all of my best strategies. After each tournament, I’ll make small strategy adjustments, but no stroke adjustments.

The second part of this article will talk more in detail about my specific plans of video analysis, physical training, rest, game changes, and tournament performance.

Video analysis is one of the most valuable tools in several ways. First, I need to study my own game. During the months of July-September, I need to evaluate whether or not I need to make any stroke changes. I’ll be consulting my practice partners and coaches for advice as well. After that, I need to study which serves, serve returns, and game patterns are most effective; this will help guide me into knowing how to make each practice more effective. Finally, I need to study my opponents. I need to know their strengths, weaknesses, tendencies, etc… This will take much of my time in stages two and three as I begin to train on how to beat specific opponents.

During the first stage, it is acceptable to try some new workout routines that might be beneficial to table tennis muscles. Once I have reached the fourth stage, I will not be doing any new exercises. Most of my current workouts consist of running, plyometrics, and calisthenics.

In the first month, I rested several days per week. In each of the other phases, I plan to rest every Sunday as well as rest a half-day during the week. I must focus on having good quality to each practice session, not just quantity. Also, sleep is very important. Because table tennis requires many quick decisions, having a clear mind is one of the most important aspects of practicing and tournaments; and this is best accomplished with eight to nine hours of sleep each night.

If I’m going to make any stroke changes or equipment changes, it is vital that I do so only in the first two stages. Short term, any changes will make me play worse. It takes about 30 days to permanently change a stroke and about 20 days to become fully adjusted to new equipment. So, before I make any drastic alterations, I first need to decide if it will have long-term benefits.

In each of the four stages, it is important that I play matches as well as compete in tournaments. At first, I might lose matches, but I gain experience. As I progress during the six months, I’ll be studying the previous matches and making changes to continue steady improvement during the six months.

What is the difference between a light and a heavy table tennis blade?