A translation of an article by Louis Holmberg that appeared on May 10 at ESPRESSEN.SE. The original version (in Swedish) is available here.

38 years later, he remains on the same floor.

– I run at full speed. I go in to this as if it were an Olympic final, said Waldner, who turns 50 in the autumn.

SPORT-Expressen accompanied him during an away trip with Spårvägens BTK.

What we saw? A genius at the table, full of emotions – and this league match may have been the Legend’s last fight in his career.

Jan-Ove Waldner is right at home as a part of Söderhamn sports, including wall bars, handball and hoisted thick carpets.

– There’s not a chance that that was inside!  No way !  screams Waldner.

It is 2 quarterfinal in the playoffs and one of the judges has just sentenced a maximum hesitant edge ball Söderhamns UIF in the team match against Spårvägens BTK.

It isn’t Waldner himself playing, it is Hampus Nordberg against Elsayed Lashin, but he can not hold back emotions.

– It feels like this same thing happens every year!

Coach Michael “apple” Appelgren is standing next to him – and about as happy with the judge.

The verdict leads to Soderhamn stepping into the lead 3-1 and having the chance to decide the entire quarterfinal series, when it is time for Jan-Ove Waldner to meet Viktor Brodd.

The 49-year-old stands at the table with a thick layer of ointment over his back and with braces on – and takes direct lead 6-2. The response from Brodd? He wins three straight balls.

It is only the first set, but Waldner turns his eyes upward toward the roof of the gymnasium and sighs.

Seven hours earlier encounter SPORT-Expressen caught up to Jan-Ove Waldner at the Årstaberg commuter station in Southern Stockholm. It is a quiet Saturday morning, the sun is shining over the capital.

Spårvägens BTK has rented a silver minivan that will take them up to Soderhamn.

Waldner jumps into the front seat next to the “Apple”, the back is Lashin together with the team’s third man Tobias Bergman, the clerk Anders Svensson and coach Thomas Johansson.

– We know what to expect, says “Janne”, as he is called in the team.

– This will be a tough match. In the first quarterfinal it was 3-3 and we lost in sudden death. It can end in any case tonight.

It’s been 38 years since he made his debut in table tennis league. It was precisely in Söderhamn against Glenn Östh, who is now sporting director of the Swedish Olympic Committee (SOC). Jan-Ove Waldner was twelve years old and lost.

Since then, he has won everything that one can win. On track list includes an Olympic gold medal, six World Championship gold medals and eleven European Championship. 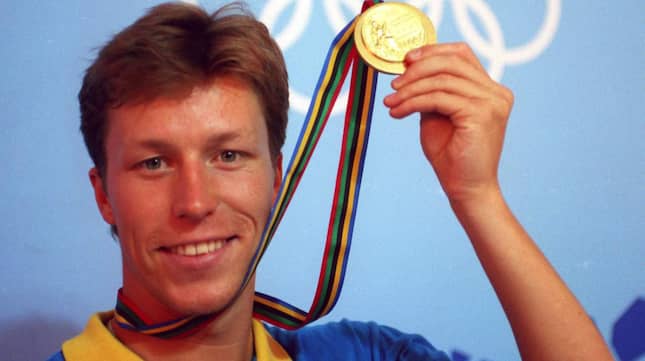 But JO Waldner has not tired yet.

– I still think it’s fun to play. Above all to play with this team, to help my mother club.

– And yes, it is clear that there are some nerves before this kind of match. Damn, we have fought as a whole team together for a year. Of course I want to win. Otherwise I would not have played.

– There will be a rush!  It is still in me. It does not matter if it’s the Olympic finals or quarterfinals against Söderhamn – I run for the rush, I want to win.

In just over two hours the bobbing mini bus reaches its destination.

Spårvägens BTK talk tactics and formation. It is about anticipating the order in which the opponent will send out his players and then match it in the best possible way.

Coach Johansson works to solve a crossword in the newspaper Dagens Nyheter.

He says he wont do it every week.

“The apple” says he is still disappointed at the DN , after they placed him at only 85th place in the ranking of Sweden’s best athletes of all time.

– They set me after lot of hockey players. Oh my God, how great a sport is ice hockey in the world? Minimum says “apple” (as he shows two centimeters between his thumb and forefinger).

– I had to speak up. I have to defend myself and defend the sport of table tennis, damn. 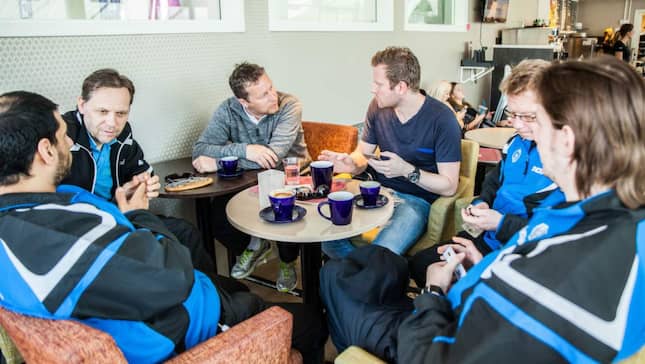 Mikael Appelgren, who has a huge heart for the sport, would also highlight that table tennis is now the world’s largest sport in terms of the number of member countries.

– 222 countries! We went past football. You can be sure to write, I think. And we are the second largest sporting terms of number of players too.

– The four major sports are football, table tennis, volleyball and basketball. Anyone who is in fifth place is terribly far behind. Ice hockey and skiing – it is not some big sports.

After a short food stop at Tönnebro lake we arrive in Söderhamn.

There are three hours left off and JO Waldner – third on DN’s rankings – have time for a coffee downstairs in the center before it is time to switch on and start warming up inside the hall.

While Elsayed Lashin and Tobias Bergman stand at the table to hit, house music thunders, and Waldner begins the process of reviving his body.

He starts to jog around the table. He moves on to small leaps. He goes on to reel his arms and carefully stretch the legs.

The procedure also includes large quantities of liniment – and painkillers. 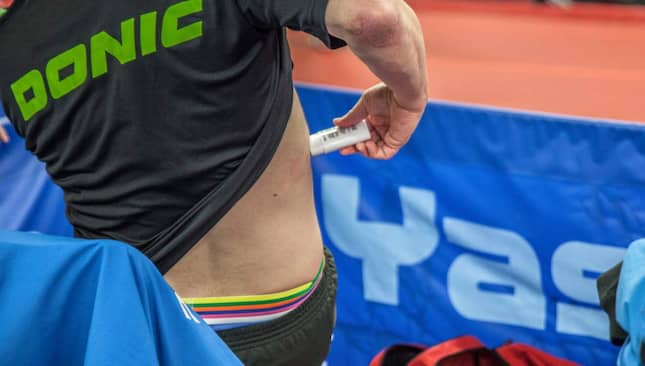 – Yes, I take a Voltaren before the games. It is because of the back. I have had problems with it since 2004 really. You know, you stand up three-four hours a day and make these twists sideways.

He simulates some forehand shot into the air.

– It takes a toll for sure. The drives down here in the back has been beaten, but it’s the same for most table tennis players who have been around a long time.

– But when you feel you can join in and help when you want to play, then it’s fun.

When the body has been alternated up so Waldner takes place at the table and starts feeding shots to Lashin – and suddenly forgets completely that he is 49 years old.

He hit some absolutely magical shots.

While sitting on the side,  “Apple” examines the quality of the balls. He spins them on a table and studies how they move.

– These balls are different. It wasn’t this way in the 80s. Look at the wobble …

Söderhamn is sponsoring tonight’s game which means it is free entry and there are easily over 200 people on site in the gym.

One of the most visible in the stands is France-pro Jens Lundqvist. He enjoys to see JO Waldner down on the floor.

– It is incredible that he is still this class of player. It proves how talented he is, what a head for the game he has. Almost 50 years old and he can still beat the really good players, says Lundqvist and shakes his head.

What does that mean for the sport that he still playing?

– It is good. He still draws people to the games. And you’re here today, for example. But … it’s good if people understand that we have better players.  He is not the best in Sweden anymore. 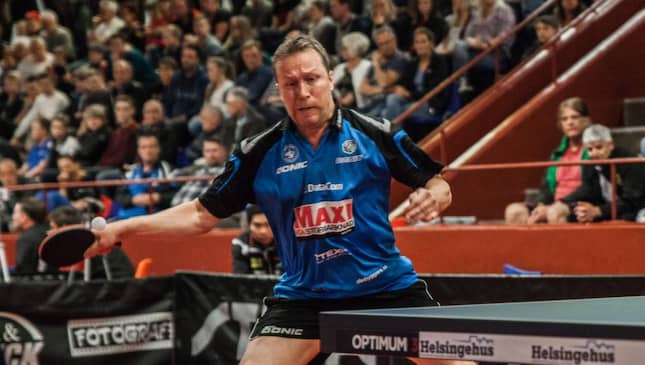 Shortly before the start of the match will be announced that JO Waldner will begin against Söderhamns Hampus Nordberg, a 27 year old with World Cup qualifications under his belt – and with great energy.

This will be a tough start.

Although Waldner offers several fabulous shots, there are also a lot of simple misses. And in the middle of everything, things happen that  should not happen: and he hurts himself. The ball makes a strange rebound off of the net and he jerks his head – and the turn seemingly stabs in his neck.

Waldner loses to Nordberg by 1-3 in sets and he exits quickly into the dressing room to put heat on his neck so he can push himself further.

When JO Waldner is back for his next match, he works past his anger from the heavy start of the match and things turn around against Viktor Brodd.

The veteran rises with the knife against the throat. Brodd can not handle the brilliant serves and he gets the victory at 3-2 in sets.

24-year-old Brodd is still a tad surprised when SPORT-Expressen spoke to him afterwards.

– It usually feel good when I meet him. But today I had a very difficult time … You try to force him to move as much as possible, but I had problems with his serve.  Then he had an extremely good game inside.

In the last set as teammate Tobias Bergman loses against Söderhamn’s rising star Anders Eriksson and the quarterfinals series is thus settled. The playoffs are over for Waldner and the gang.

He is disappointed when he drops down on a bench alone in the locker room.

– It’s hard to lose, even if they were favorites in this match. And it will be one of those missed opportunities  … it is not good for the sport.

– But we fought on anyway.

When Jan-Ove Waldner step out from Söderhamns gym and encounter early summer evening, so many people are asking themselves the same thing: Was this the last game of his fabulous career?

He himself is uncertain.

– I have not decided about next season yet. We shall see. It feels like I have to lose three or four kilos and improve a little, maybe I’ll make it work another year, said Waldner.

– But I hope it works. I hope this was not the end. 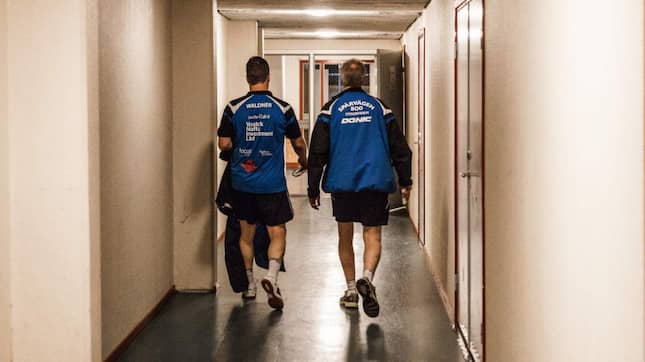 Before he jumps into the mini bus with the rest of the team, he also says:

– It is not always so glamorous to be table tennis players, but for me it’s perfect. I’m not jealous of Zlatan Ibrahimovic, Leo Messi and the other football players who have hysteria around him all the time.

– For me it is enough for seven or eight days in China. I can not walk a meter without people want to take pictures. Then I’m going home. Here it is a little quieter.

The former world-class professionals Jan-Ove Waldner, Jörgen Persson und Mikael Appelgren are known as the golden generation of the Swedish National Team and dominated the...

A great friendly competition between the great JO Waldner and AC Ahlquist on her terms!  Paddle Palace strongly supports para table tennis and their athletes...

An interview with J-O Waldner at his 50th Birthday Celebration. ...