“Chinese are not guilty if they win every championship”

“Chinese are not guilty if they win every championship” 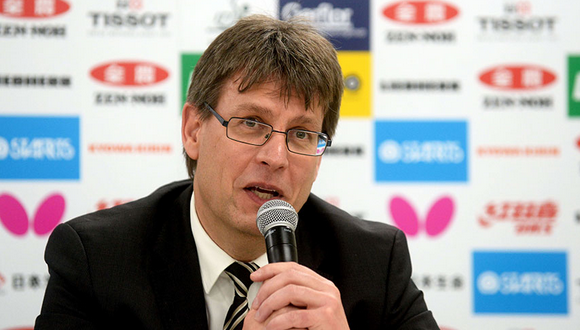 Excerpts from an interview with ITTF President Thomas Weikert conducted by Yutang Sports at the 2016 Sport Accord Convention in China.

Thomas Weikert：OK. we often heard that maybe it’s a little bit boring, I’ll start with this. If the Chinese win every Championship,that is…Chinese are not guilty of that, because they are the best. They have the best coaches, the best players, the best development and maybe the best research for young players.

I was often in Beijing, Guangzhou or Shanghai and visited centers and saw how they practice, how many young children are playing table tennis, so this is the first. Secondly, of course for a sport it’s very interesting if you have very good competition. You don’t want to have world championship final China against China. If you have China against japan, or China against Korea, or China against Germany, because Germany, as you know i am from Germany, is also strong. So this is one side, but on the other side,We have made some researches about sports in China, internet, TV and the figures.

We stated at the moment we are on a good track. We have very good figures from the last championships in Suzhou in 2015 and also from our championships in Malaysia.CCTV was very satisfied with the figures, especially in prime time between 18:30-21:30.

Next thing is we are working on this. We have some projects in China, I was there in the middle of January to talk with the Chinese association on how to have new ideas, that China has proven that they have the best coaches, the best players ,maybe they can help others to make good players practicing in China ,to stay a long time in China, and send coaches to other countries which China is doing. We have a project in Tunisia.We have the China Table Tennis College in Shanghai and Luxembourg ,so the first things are done.And it’s not only China,also other Strong federations can do that,invite players or something like that.

Yutang: We still have the feeling that basketball, football is really growing in China,but engagement of the fans are lower.

Thomas Weikert：I can’t agree fully because we have figures from two agencies and they say football is the number one at the moment, but then basketball, badminton and table tennis are on one level ,which depends on, for example if you have events there. But it’s right we have to do something, maybe the younger generation has not so much identified with Ma Long, Ding Ling or Liu Shiwen from China.

I don’t know exactly why. We are working on this fan sport ,something like this. That children not only have competitive sports but also like beach volleyball. They started with volleyball and then they have beach volleyball. They started with the funny one ,which is now also a very competitive sport.We are not talking about this now,but we are working on this.So as for China,i know there are many fans ,you are probably right we have to do something in identification.

Yutang: what is your opinion on digital activity in China?

Thomas Weikert：The deal with Shankai for us is very important. I think it proves that companies in China are interested in our sports. Seca, which is a big company and is doing a lot of digital rights, also in Europe ,they were interested in our sports .Because internet is growing ,and also maybe it’s good that you have different partners. Maybe for TV,we have CCTV, we are negotiating with some companies, the digital rights is really a good sign for others. We have sold the digital rights in other Asian countries, like Singapore and Japan, so it’s good thing.

Yutang:Do you think there will be more digital intervention?

Thomas Weikert：I think the direction is not yet clear, but it’s clear from the economic side that companies who have these digital things want to make more. They are also investing more money. TV has to do something, because internet is …clear, if you a fan, you can go internet to have all these things live, real good quality now, for us it’s a good step.

Thomas Weikert：We think social media is big opportunity. In China, We have Tencent Weibo, Sina Weibo . In European countries We have YouTube, Facebook and Instagram.As I have the numbers in my head, we are number three from the sports federation. I asked our Press officer what is the situation right now? He said :”we are growing, we are growing”, so I think the deadline is not yet finished.

Also we are developing at the moment our new website. We at the moment still have no app,for example ,which is very important. I think many sports have that (app) because if you have a new website 15 years ago, it was brand new, but now it’s old fashion. So we have to do something and we’ll launch the new website shortly before the Olympic games.

So we are also expecting more figures if people go at Olympics on our websites. Users want to have a click and want to have special results.At the moment we have not.we said we have to do something , so we started the process at the beginning of the year.

Yutang: Which region are you targeting?

Thomas Weikert：We will use that. Before the Olympic Games We will promote our sports We will invite, say, world champions from China, from Europe and we have to promote, because I think we have been in Beijing, it’s a table tennis country. In London, we were very surprised, because we have very good figures. In 2020, japan is also traditionally table tennis country. Rio is not ,so we have to do something there. I hope it works.i am confident it will work.

Yutang: When it comes to Sport Accord Convention, how do you capitalize on this gathering?

Thomas Weikert：Yes ,big event. You can do in five days or in three days what you do in half a year, because you meet a lot of people, so it’s very useful for us. We are meeting with the bidders from Olympic 2024, with Pan-American and with potential sponsors.It’s always very useful to meet sports,sponsors and cities, which are very important.

Yutang：How would you summarize your vision for table tennis？

Thomas Weikert：From the point of development, as i said, Latin America, North America and also Africa. Regarding membership,we are the biggest association with 222 associations.And there are many associations who are not well developed. We have to do something with coaches and equipment. Next thing is that we show that our sport is not only an Asian sport from domestic It’s a big goal.Together the Chinese, we have to work with China.The third goal is to have more TV and internet coverage for table tennis in countries which are not good at table tennis.

OK. we often heard that maybe it’s a little bit boring, I’ll start with this. If the Chinese win every Championship,that is…Chinese are not guilty of that, because they are the best. They have the best coaches, the best players, the best development and maybe the best research for young players…

Hot & Wild: The Winds of Patagonia