TIMES PHOTO: JONATHAN HOUSE – Judy Hoarfrost hits a table tennis ball during a game at the new Paddle Palace headquarters on Main Street in Tigard. The company is a world leader in table tennis equipment and Hoarfrost said she’d like to see the sport become more popular with Americans.

Ping pong. Table tennis. No matter what you call it, Judy Hoarfrost calls it her life’s work.

For decades, the former professional table tennis player has been working to make the sport she loves relevant to Americans.

Hoarfrost is president and CEO of Paddle Palace, a table tennis equipment distributor started by her father in the 1970s.

For decades, the Portland business has been a world leader in providing equipment to the globe’s table tennis community, offering everything players need, from paddles to tables to nets and more.

But after years in a cramped headquarters in Multnomah Village, the company is settling into a 25,000-square-foot facility on Tigard’s Southwest Main Street.

Table tennis is one of the most popular sports in the world. With an estimated 10 million players, it’s second in participation only to soccer.

Hoarfrost said that so many around the world are drawn to the sport because it’s easy to learn and can appeal to anyone.

“It’s a lifelong sport,” she said. “There are a lot of sports that kids play, but they can’t do it when they get to be 30 or 40, like gymnastics. But with ping pong, you don’t have to be big or tall or short or skinny or fat. Anybody can play, even with no experience. They pick up the paddle and have fun, or if you take it seriously, you can take a little bit of coaching and get better.”

TIMES PHOTO: JONATHAN HOUSE – Paddle Palace owner Judy Hoarfrost, fourth from left, and her teammates were featured on the cover of Time Magazine in 1971 while on a historic trip to China. The trup came to be known as Ping Pong Diplomacy.

Hoarfrost has been playing since she was a girl. Competing in her first U.S. Open at the age of 11, she made the U.S. national team at age 15. She was inducted into the Oregon Sports Hall of Fame in 2006.

Hoarfrost has seen first-hand how table tennis can bring people together. In 1971, a then 15-year-old Hoarfrost was one of 20 Americans invited to China for a friendly competition. At the time, the team was the first group of Americans allowed into the communist country in more than 20 years.

Still a teen, Hoarfrost found herself in the middle of the international spotlight as news outlets around the world covered their historic visit. It would be another year before President Richard Nixon would visit China, normalizing Sino-American relations.

Hoarfrost’s trip came to be known as “ping pong diplomacy.”

Despite the role it played in American politics, table tennis has traditionally struggled to find a foothold among American athletes.

Since the sport was introduced to the Olympics in 1988, table tennis has been steadily gaining in popularity.

“When you watch movies or TV shows, you see table tennis all the time,” Hoarfrost said.

There are more clubs now than ever before, she said. But it needs to do more.

Another sport that struggled for decades to find itself with American audiences was soccer, but Hoarfrost that sport has since gone on to become extremely popular.

She hopes to see the same thing happen to table tennis.

“Soccer used to be nothing in this country,” she said. “What has soccer done right? They have a huge youth program. We have to be organized, too. You have to have a place that parents feel they could drop their child off. It has to be safe, well organized, fun, a real class where they are learning and engaged. It has to be all those things and table tennis hasn’t been there. When I was playing, I’d be the only kid, the only girl.”

TIMES PHOTO: JONATHAN HOUSE – Judy Hoarfrost shows off the large warehouse of Paddle Palace, the table tennis equipment company her family has run since the 1960s. The business is planning to open a table tennis club next door for players of all abilities to learn and practice the sport.

“My dream is to put a table tennis club in here,” she said. “We can do events, have classes for kids, for beginners, for seniors. We want to welcome everybody.”

Many novice players are turned off from the game because more experienced players make them feel bad, she said.

“We’d make it accessible so it’s comfortable and fun for everyone,” she said.

And for more experienced players, the club would offer workshops from the business’ long list of world-class athletes.

“We’re connected with some of the best players in the world,” she said. “We can do clinics. I’d love for it to also be a good place where people can train, not just for beginners but also people in the higher levels.” 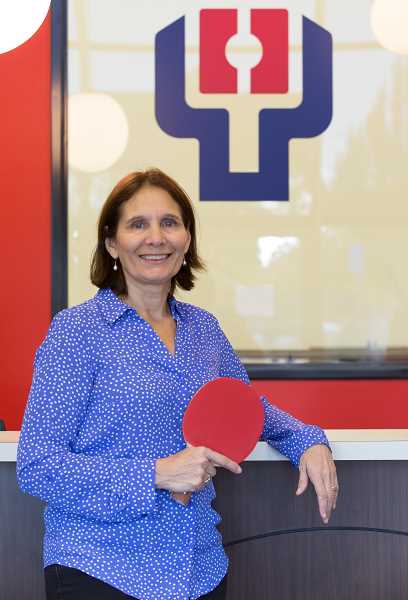 TIMES PHOTO: JONATHAN HOUSE – Judy Hoarfrost is the owner of Paddle Palace, which relocated to just off Main Street in Tigard earlier this year.

It would be a return to its roots for Paddle Palace, which Hoarfrost’s father, Lou Bochenski, started as a table tennis club in Portland in 1974.

“It was in an old Elks Club building with chandeliers and angels carved into the ceiling. It was like a palace,” Hoarfrost said.

The club operated for a few years before Bochenski transitioned into the equipment distribution business.

“Dad had a suitcase with equipment. When we’d go to a tournament, he’d open up the suitcase and he’d sell stuff to people,” she said. “That’s sort of where it started and it just kinda grew from there.”

Today, Hoarfrost runs the business with her brother, Michael Bochenski, shipping millions of products a year all over the country as the U.S. distributor for many of the world’s leading table tennis brands.

The table tennis club is still just an idea, but Hoarfrost said she’d like to set it up within the next year.

“That’s phase two,” she said. “We’ve had a lot of folks say that they’d love to come here and play, but for now, we’re still settling into the new building.”

Hoarfrost is also planning to bone up on her own skills. She hopes to compete in the World Veteran Table Tennis Championships in 2016.

“I might do that,” she said. “I haven’t played internationally since I was on the U.S. team. That’s part of the reason I want to get the club going here. I’ve got to practice.”