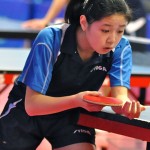 There is a well-earned sense of pride and accomplishment emanating from Northern California after this weekend’s competition at the 2013, ITTF-North American Cup, held in Westchester, NY. Credit Lily Zhang and Timothy Wang for creating the “buzz” by representing their US Team and their ICC/STIGA club team with stellar play and exemplary results. Lily Zhang, the event’s second seed, was crowned the ITTF-North American Cup Women’s Champion while her ICC/STIGA club teammate, Timothy Wang, finished in the men’s runner-up position, losing 2-4 in a epic, back and forth battle against Canada’s Andre Ho.

By winning the women’s title, Lily qualifies to compete in the STARTS Women’s World Cup in Kobe, Japan scheduled for September 21 – 23. Asked how she felt, Lily said, “Definitely feel good. I played well and kept myself calm. Tried not to think ahead and just stay in the present.” *

Congratulations to both ICC/STIGA team players Lily Zhang and Timothy Wang for their great results at the ITTF-North American Cup and for their continued dedication and leadership on and off the table.

*Hear an exclusive interview with Lily Zhang as she talks about her mental approach to winning table tennis by clicking on the YouTube box below. 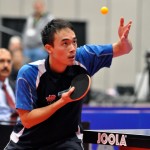 Congratulations to Timothy Wang for his determination and grit against Andre Ho in the finals!

Coaching Tip: The Decline of the High-Toss Serve and Why You Should Learn It