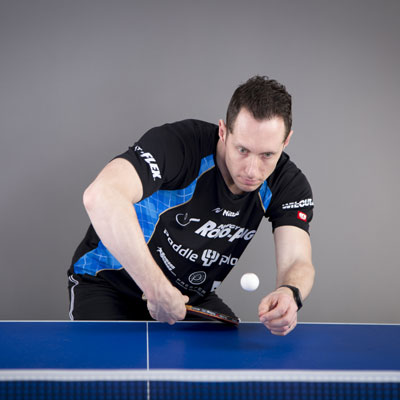 Are you looking for it?

Unless you can find the root of the problem – your problem with persisting and you will continue losing. I often ask players why they lost a specific match. They often respond with…

When I ask for specifics, some have no answer, while others somewhat give generalities like…

“I missed too many backhands.”

If you use generalities, you will likely continue losing. Simply telling yourself to stop missing backhands won’t make your more consistent. It is critical during the match that you understand what is going on, why you missed that shot, and how to get to the root of the problem to fix it. It takes concentration and discipline, but it is easier than you think. Sometimes you might even know the answers, you just aren’t asking the questions.

There are hundreds of scenarios, but I’ll give one example here in this article…
You served long backspin to your opponent’s backhand, he looped, you blocked it out. What went wrong?
You might say…

“I missed my backhand!” (no kidding)
“I hit it off the end of the table!” (no kidding)
“I hit it too late.” (true, but why)
“I needed to take it earlier!” (you just said that)
“I should have reacted faster by moving in for the shorter, spinnier loop, timed it earlier, and applied gentle downward pressure.” (yes, but it isn’t just reaction based on when the ball is traveling toward you.)

That spinny short loop to your backhand was totally predictable. You intentionally chose to serve heavy backspin, half-long to your opponent’s wide backhand. Your opponent wasn’t quick enough to take it early, so he dropped his racket way below the ball, and with late timing, spun it short to your backhand. You timed it too late your blocked out.

You see, all the answers were correct, but they just weren’t getting to the root of the problem. Yes, you did have a bad match; yes, you did need to practice more; yes, your opponent was playing well; yes, you did miss many backhands. These answers are correct but not deep enough. In this situation, it was your pre-point routine of understanding what you were going to serve, your position from the table, and your bad reaction to the actual ball that came. Every time you miss, every time, yes every time, there is a reason that you missed and there is a solution. It is your job to problem solve during every training session, every match, and every tournament.