Ratings and Skills
by Samson Dubina 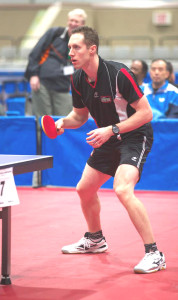 Often times, table tennis players will wrongly associate ratings with skills. Just because an opponent has a certain rating doesn’t necessarily mean that your opponent can or cannot do certain skills. For example…

I asked my 1800-rated student why he wasn’t attacking his (2100-rated) opponent’s half-long serve. My student responded by saying that because his opponent was rated 2100, he assumed that all his serves were short.

I asked my 1200-rated student why he kept hitting to his (600-rated) opponent’s backhand. My student responded by saying that his assumed that all low players have weak backhands.

I asked my 1700-rated student why he kept trying to smash every ball against his (2300-rated) opponent. My student responded by saying that he assumed that he probably couldn’t return any balls anyway and decided just to go for high-risk shots.

These hypothetical illustrations are used to show that you can’t assume the set of skills of players merely based on their playing level. You must play each opponent individually instead of stereotyping players by rating.