Table Tennis Training Stage IV: Putting It All Together

Table Tennis Training Stage IV: Putting It All Together

Training – Stage IV
Putting It All Together

Now that I am concluding stage three of my table tennis training for the Olympic Trials, I have started the process of tying my game all together. During the first stage, I focused on 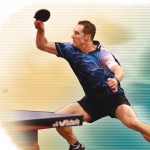 physical training. This stage was important as it gave me a base of conditioning so that I wouldn’t get injured during the six months of training. Stage two consisted of footwork drills and consistency in the long rallies. This was important because it gave me the confidence to play long rallies with any opponent while playing off-the-bounce or far from the table. Stage three consisted of adding other elements to the footwork drills. During stage three, many of the drills were positioned to random locations and started with an opening loop or flip. As I begin stage four, I’ll be doing mostly game-situation practice. There are several elements of stage four that I’ll be detailing in this blog.

In stage four, I’m planning not to make any major changes to my strokes. It takes about thirty days to permanently change a stroke. If I choose to make a change, my game will progress downward a bit, and I don’t have time for that. By the Olympic trials, my strokes should be completely automatic with no thought about the actual mechanics of the stroke.

During this time, my mind will be filled with shot variation, ball placement, and game strategy. When training in the first three stages, my game was primarily focused on MY physical conditioning, My footwork, and MY strokes. Now my mind is thinking more about my table tennis opponents and what I need to do to beat each of them specifically. Table tennis is not a sport where I am competing against my own time or my previous score. In table tennis, the only way to score a point is when my opponent misses. To a certain degree, I don’t care how good my strokes are or how well I am playing. I care most about making my opponent miss. By varying the speed, spin, placement, and choice of hit, I can keep my opponent off-balance and cause easier mistakes. Each opponent obviously has various strengths and weaknesses. It is very important for me to know these before beginning the match. I can’t wait until I lose the first two games before understanding the strategy for each opponent.

In stage four, I’m going to play as many matches as possible; this will take about thirty percent of my training time. In this stage, I will focus on applying my game strategies and winning each point. Even in practice, I use six-point-towel breaks as-well-as time-outs. Before the Olympic trials, I’m planning to go to Canada for ten days of elite matches as well as one major tournament in Montreal. After each of these practice matches, I’ll ask my Canadian training partner for his advice about my game – particularly about strategy. Right after the match is the best time to ask. Playing matches is the best way to apply all the elements together and have a clear picture of what I need to do at the Olympic trials.

Also, right before the Olympic trials, it will be important for me to practice the half-long balls. Half-long balls are the serves or pushes that nearly double-bounce. Taking a shorter backspin, getting close to the ball with my body, and focusing on spin are the keys. I often have my training partners serve half-long, push-half long, and feed multiball half long. Robot training is another great tool for looping half-long balls. I do drills that give good variation by sometimes shooting just short and sometimes shooting just long.

About seventy percent of my practice time will be doing drills. During the drills, I’ll be focusing primarily on random drills starting with a tournament serve. Below, I have listed three of the drills that I regularly do:

1. I serve short.
My opponent pushes short or medium or long to my backhand. I flip or loop the push to my opponent’s backhand, he blocks one ball to the middle and one ball to each corner while I continue to loop to his backhand.
A strong opening on giving a spinny, short, low serve follows my focus. If I successfully make it past that, then I need to stay close, be consistent in the rally, and vary my loops. My goal is not to “rally” with my opponent; my goal is to win the point usually in the first three hits. If the opportunity arises, I’ll use my forehand to finish any easy balls.

I also plan to do similar exercises with multiball. During a multiball session, I generally practice the first two balls. I’ll have my opponent feed multiball and have him hit with the same ball.

1. My trainer pushes one short backspin ball.
I step forward and return short, he pushes the same ball deep to any location, I loop that push anywhere on the table.
After a two-second break, my trainer begins the next two balls. In a matter of ten minutes, I can practice many short balls and many opening loops. Just before a major competition, this is one of the best ways to practice my opening.

2. My trainer pushes one short backspin ball.
I step forward and return short, he pushes or flips the same ball to any location, I attack that ball anywhere on the table regardless if it is long or short. After a two-second break, my trainer begins the next two balls.

January’s blogs will be the final postings prior to the Olympic trials. As a reader, I hope that you have gained much insight into the depth of training professionally. If you want to watch my matches, they will be streaming live at www.usatt.org during the week of February 9th-13th.